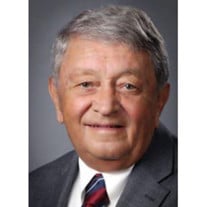 William “Bill” Henry Robbins, Jr., a devoted husband, father, grandfather, brother, and friend. passed away due to organ failure on April 12 at the age of 79 in the comfort of his home in Baton Rouge surrounded by his loved ones. William is survived by his wife of 57 years, Mary Ann; his three sons, Will and his wife Shari of Baton Rouge, Rob and his wife Shelley of Frisco, TX, and Jeff and his wife Noëlle of Lebanon, PA; his eight grandchildren, Cole, Cameron, Charlie, Emery, Cassie, Rose-Marie, Jude and Sage; his sister, Kathy and husband, Charles Jones; his sister-in-law, Sarah and husband Wayne Kuhn and his many cousins, nieces and nephews. He is preceded in death by his parents, William H. and Velma Robbins. He was born on February 10, 1942 in Bogalusa, La. After graduating at the top of his class from Angie High School in 1960, where he was an all-parish basketball player, he went on to receive his Bachelor of Science degree in Education in 1967 from Louisiana State University. After graduating he began his career with East Parish School System as a teacher before accepting a position of Director of Data Processing (Information Systems) for over two decades. During his final years, he served as Director of Equal Educational Opportunities, where he acted as trusted liaison between the school board, the federal court, and the NAACP, and played an integral role in the final settlement agreement in what ended up being the longest running desegregation case in U.S. history. After 36 years of service to the school system, he retired in 2003, only to return in 2005-2006 to provide much needed assistance and relief after the devastation of Hurricane Katrina. For the whole of his life, there was never really a time when William and Mary Ann were apart. They grew up across the street from one another, were teenage sweethearts, and were married in 1964. Their life together was a full one, with their shared faith, family devotion, frequent travel, and frenzied fandom of LSU sports. Nothing pleased him more than to be with family, especially on the rare occasions when all eight of his grandchildren could be together. He was an avid golfer who felt especially privileged to have attended the British Open and the Masters, and also to have played many of the great courses, including the Old Course at St. Andrew’s, and Pebble Beach in a trip with his sons that was their Christmas gift to him in 2011. William actively served the community as a Director on the Board for the Neighbors Federal Credit Union for over twenty years, and through church. He had an abiding faith in, and love for Jesus, and great respect for decency, kindness, and consistency of character. He was a youth Sunday School teacher, as well as a deacon, a trustee, and on various other committees at Parkview Baptist Church. In his later years, he continued his lifelong study of the Bible as an active member of the “Sonshine Class”. He was a man who did big things in an unassuming way, and who took great pride and joy in the simple things of life: Sunday dinners with the family after church, games of croquet in the backyard, or cheering his grandchildren on, no matter the sport, the instrument, or the performance. He was a loving and faithful presence to all those who knew him best and will miss him most. Family and friends are invited to attend the visitation on Saturday, April 17 at Parkview Baptist Church from 8:30-10:00 followed by “A Celebration of Life” service at 10:00. In lieu of flowers, a donation may be made in his name to Parkview Baptist Church. A burial service will be held at 2:30 p.m. at Resthaven Gardens of Memory. The family wishes to express special thanks to Pinnacle Hospice caregivers and his other special sitters during his last days.

William &#8220;Bill&#8221; Henry Robbins, Jr., a devoted husband, father, grandfather, brother, and friend. passed away due to organ failure on April 12 at the age of 79 in the comfort of his home in Baton Rouge surrounded by his loved ones.... View Obituary & Service Information

The family of William Henry Robbins Jr. created this Life Tributes page to make it easy to share your memories.

Send flowers to the Robbins family.