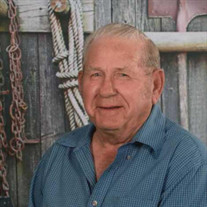 William Jackson (Jack) Forrest age 83 of Creola, Alabama passed away Saturday, April 3, 2021. He passed away peacefully at his residence with his loving wife, daughter and son-n- law by his side. He was born in Clio, LA on May 5, 1937. Jack who was a Class A Mechanic later retired from LL&E. After his retirement he settled in Creola, AL where he resided for many years. He enjoyed hunting fishing, crabbing, and continuing his mechanic skills while tinkering with motors, mowers, watches, etc. He kept people rolling in laughter because he could find humor in almost any circumstances. He has a passionate love affair with ice cream. Jack loved to travel, with that being said no matter where he was, he could hunt down a Wal-Mart. Most of all he enjoyed spending time with his family, especially the three generations of grandchildren, that he was blessed to have. His blue eyes and smile could light up a room. Jack is preceded in death by his late wife; Mary Forrest, two children Susan Herbert and Bubba Herbert, as well as his parents, brothers and sisters. His family will continue to honor his legacy by living their lives to the fullest in the days ahead. Jack is survived by his loving wife, Joyce Marie Forrest, children; William Forrest of Louisiana, Vernon Leroy Forrest of Louisiana, Sonya Credeur of Alabama, Michael Dale Forrest of Louisiana, Patty (Billy Coon) Sensat, Juanita Sonnier, Joseph (Karen) Credeur of Louisiana, Cynthia (Robert) Fontenot, Bernice (Johnny) Finchum of Alabama, Jason Forrest of Alabama, Anna (Mike) Bignar of Louisiana, Rodger Granger, Lettie (Peanut, Frank) Potiniff, of Louisiana, Susie Granger of Texas, and Sandra Moran of Louisiana. as well as many nieces, nephews, and three generations of grandchildren. Visitation will be held on Wednesday, April 7, 2021 from 11:00 AM - 1:00 PM at Valhalla Funeral Home. Visitation will also be held at Brandon G. Thompson Funeral Home, Ponchatoula, LA on Friday, April 9, 2021 from 11AM until 1PM. The Funeral Service will follow in the funeral home chapel at 1PM. Interment, Wetmore Cemetery, Ponchatoula, LA.

William Jackson (Jack) Forrest age 83 of Creola, Alabama passed away Saturday, April 3, 2021. He passed away peacefully at his residence with his loving wife, daughter and son-n- law by his side. He was born in Clio, LA on May 5, 1937. Jack... View Obituary & Service Information

The family of William Jackson "Jack" Forrest created this Life Tributes page to make it easy to share your memories.

Send flowers to the Forrest family.