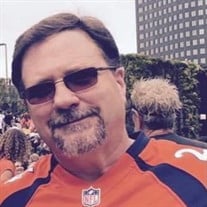 William Terry Bailey, 55, of Ponchatoula, passed away on February 28, 2021. Terry was born on April 4, 1965 to John and Betty Bailey in Union, Mississippi. After graduating from Riverdale High School in 1983, he went on to study at Southeastern Louisiana University. After graduation, he landed a job in the Electrical Industry that he worked for almost 40 years. Terry was a force of nature, determined to provide for his family and give them the life he felt they deserved. His family meant more to him than anything else in the world, something he often mentioned. He was unendingly proud of his children Crystal, Brittany and Brandon. Terry was also passionate about fishing, hunting, football and being outdoors. He loved spending time with his kids and grandkids. Anyone who knew Terry knew that he was the most loving father a family could ask for. Terry was preceded in death by his father, John Bailey, daughter, Braelyn Bailey, granddaughter, Briella Monteleone and many others. He is survived by his mother, Betty Bailey, mother of his children, Christine Bailey, daughters, Crystal Bailey (Chad), Brittany Bailey Culotta (Michael), and son, Brandon Bailey (Erica), grandchildren, Brinley, Gemma, Rylan, Bryant, Cambree, Aydin and soon to be Basyn, Misty Balsamo, Brandon Balsamo, Brittany Balsamo, brothers Johnny and Coyt Bailey, many cousins, aunts, uncles, nieces and nephews. The family requests that all flowers and notes are sent to Brandon Thompson Funeral Home in Hammond, LA. Relatives and friends are invited to attend the Visitation at Brandon G. Thompson Funeral Home, 12012 Hwy 190 West, Hammond, LA on Saturday, March 6, 2021 from 10AM until 12PM. The Celebration of Life Service will begin at NOON in the funeral home chapel. Please join us via Zoom for the funeral service. Click the link and enter the meeting ID and password to join. https://zoom.us/j/96142062502?pwd=bFVHc2htSG5FcDBYb0cvQjJhZWp4UT09 Meeting ID: 917 9073 6050 Passcode: 711133

William Terry Bailey, 55, of Ponchatoula, passed away on February 28, 2021. Terry was born on April 4, 1965 to John and Betty Bailey in Union, Mississippi. After graduating from Riverdale High School in 1983, he went on to study at Southeastern... View Obituary & Service Information

The family of William "Terry" Bailey created this Life Tributes page to make it easy to share your memories.

William Terry Bailey, 55, of Ponchatoula, passed away on February...

Send flowers to the Bailey family.