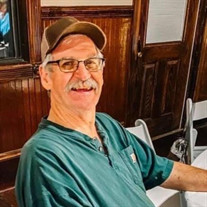 Wayne Gayle Martin Sr., age 73, passed away on Sunday, April 10, 2022 at his home, while surrounded by his family. Wayne was a loving husband, father, grandfather and brother and friend to many. He was a lifelong resident of Pumpkin Center, Louisiana and a United States Army Veteran. To say Wayne was mechanically inclined is an understatement. He could fix just about anything and didn’t believe in throwing things away. His family never knew what he would “Waynanise” next. He looked forward to getting his day started by having breakfast with his buddies. He wouldn’t dream of driving anything but a Ford and was a loyal customer and friend of Gateway Ford. He enjoyed deer hunting and spending time at his camp in Mississippi but listening to his dogs run was what brought him the most joy while there. There is no denying that Wayne had a stubborn streak. This stubbornness, along with tenacity for life, and love for his family helped him put up a valiant fight against cancer, far exceeding the life expectancy given by his doctors. “I have fought a good fight, I have finished my course, I have kept the faith”~2 Timothy 4:7. Wayne leaves behind his beloved wife of 44 years, Shelia Bankston Martin; son, Wayne Gayle Martin Jr. (Rebecca); daughters, Nicole Martin Milton (Chad), Bliss Martin Flanagan (Stevie); grandchildren, Hannah and Blake Martin, Addisyn Milton, and Logan and Levi Flanagan; siblings, Rodney Martin, Melissa Martin Stilley (Lloyd), and Tonya Martin Stafford (Orlin). He was preceded in death by his parents, Henry Martin Jr. and Norma Davis Martin; brother, Allen Martin. Relatives and friends are invited to the visitation at Brandon G. Thompson Funeral Home, 12012 Highway 190 West Hammond LA 70401, on Wednesday, April 13, 2022 from 5:00pm until 8:00pm and again on Thursday, April 14, 2022 from 9:00am until the funeral service at 11:00am. Dr. Joe Martin will conduct the service and interment will follow in Jerusalem Baptist Church Cemetery.

Wayne Gayle Martin Sr., age 73, passed away on Sunday, April 10, 2022 at his home, while surrounded by his family. Wayne was a loving husband, father, grandfather and brother and friend to many. He was a lifelong resident of Pumpkin Center,... View Obituary & Service Information

The family of Wayne Gayle Martin Sr. created this Life Tributes page to make it easy to share your memories.

Send flowers to the Martin family.