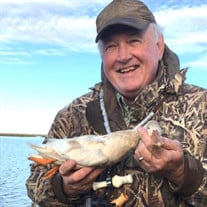 Wayne L. Hagan, age 66, passed away on Sunday, February 28, 2021 at Ochsner Medical Center in New Orleans, Louisiana surrounded by his family. Wayne was born on April 4, 1954 on an army base in Del Rio, Texas to the late June Dykes and Herman Hagan. His father passed away unexpectedly when Wayne was just an infant. He was raised in the small town of Montpelier, LA by Tom and June Dykes, his parents. He earned a Bachelor of Science in Forestry from Louisiana State University and was the owner of Timberland Management Services, Inc. He was appointed as a member of the Louisiana Forestry Commission in 2005, and he was a member and elder of First Presbyterian Church of Ponchatoula. Wayne loved nature and was an avid outdoorsman, who shared his love of duck and turkey hunting with many life-long friends. When it came to traveling, he was always ready for a trip…as long as it involved a hunt. He loved his family above all else, with his grandchildren being his greatest joy. Despite the great success he found in business, he remained down to earth, humble and kind. Raised by a basketball coach, his love for the game began at a young age. He was a talented athlete, who attended Southwest Mississippi Community College on a basketball scholarship. He later coached his daughters and remained an LSU fan for life. Wayne was a man of many interests and talents but he enjoyed the simple things in life. Out of everywhere in the world, the Manchac Swamp, which he called “a piece of heaven on earth” was his favorite place to be. Wayne is survived by his best friend and beloved wife of 27 years, Peggy Lea Hagan; daughters and sons-in-law, Heather and James Bankston, Lindsay and Lance Thompson, and Beth and Gus O’Krepki; grandchildren, Brynleigh Berthelot, Gavin Bankston, Ava Berthelot, Molly June Thompson, Sarah Beth Thompson, Hagan Thompson, Bruce O’Krepki, and Mattie O’Krepki; brothers and sisters-in-law, Rodney and Dianne Dykes, and David and Gaye Dykes. Wayne was preceded in death by his father, Herman Hagan, and parents, June and Thomas Dykes; grandson, Hunter Thompson. Relatives and friends are invited to the funeral service from the chapel of Brandon G. Thompson Funeral Home in Ponchatoula, 1190 Highway 51 North Ponchatoula, LA 70454, on Saturday, March 6, 2021 at 2:00 pm, with visitation beginning at 10:00 am. Pastors Jeremy Glascock and Aaron Gordon will conduct the service and interment will follow in Wetmore Cemetery. Memorial donations may be made to OPTIONS (19362 West Shelton Road Hammond, LA 70401), or The International 22q11.2 Foundation (P.O. Box 532 Matawan, NJ 07747).

Wayne L. Hagan, age 66, passed away on Sunday, February 28, 2021 at Ochsner Medical Center in New Orleans, Louisiana surrounded by his family. Wayne was born on April 4, 1954 on an army base in Del Rio, Texas to the late June Dykes and Herman... View Obituary & Service Information

The family of Wayne L Hagan created this Life Tributes page to make it easy to share your memories.

Send flowers to the Hagan family.