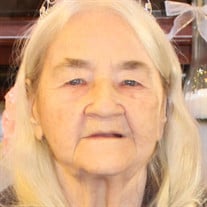 Verla, age 81, passed away Friday, May 21, 2021. She was a lifelong resident of Whitehall, LA. Verla enjoyed dancing, reading, playing rummy, and doing puzzles. She truly was a one-of-a-kind lady who always spoke her mind. Verla believed in... View Obituary & Service Information

The family of Verla Mae Fontenot Hayman created this Life Tributes page to make it easy to share your memories.

Send flowers to the Hayman family.