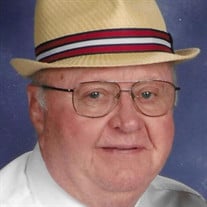 Dillard, age 80, went to his heavenly home on Sunday, March 21, 2021. He was a lifelong resident of Albany, LA who lived an extraordinary life. It all began when Dillard decided to serve his country by enlisting in the United States Navy where he fought in Vietnam from 1958 - 1962. After the Navy, he spent many years as a member of the Local 720 Millwright Workers Union. Dillard served with the Livingston Parish Sheriff’s Office where he retired after over 30 years of service. He also worked in the tri-parish District Attorney’s Office and served as a member of the American Legion. The good citizens of Albany, LA elected Dillard to serve as their Mayor from 2011 through 2014. He was a member of the Masonic Lodge #466 in Albany for many years. During Dillard’s free time he enjoyed spending time with his family and tending to his many animals which included, registered Charolais Cattle, a bull named Dawson, horses, goats, and rabbits. Dillard was a loving husband, father, father-in-law grandfather, and great-grandfather that will be deeply missed by all who knew and loved him. He is survived by his loving wife of 55 years, Flora Bostwick Stewart; sons, Thomas D. Stewart III “Putt”, Brian Keith Stewart (Tiffany); daughter-in-laws, Michelle Stewart, Sandy Smith, Jeanna Saucier; brother, George H. Stewart (Mary); sister, Lillie Bankston; sister-in-law, Vesta S. Stewart; grandchildren, Summer, Jacob, Desiree’, Megan, Tom, Shelby, Allie, Joshua, Crystal, Dakota, Kelsey, Dawson, Brittany, Morgan, Richard; 20 great-grandchildren and numerous nieces and nephews; fur babies, Milo and Rastus Dillard is preceded in death by his parents, Thomas Dillard Stewart Sr. and Myrtis Jeanette Stewart, sons, Kyle Stewart and Jeff “Bodean” Stewart; brother, Johnson Stewart; sister, Mary Catherine; grandson, Jerry Kyle Stewart. Relatives and friends are invited to attend the visitation on Friday, March 26, 2021, at the chapel of Brandon G. Thompson Funeral Home, 12012 HWY 190 West, Hammond, LA 70401, beginning at 10:00 a.m. until the funeral service at 1:00 p.m. that will be officiated by Br. Joe Dunn. The interment will follow at Bethlehem Baptist Church Cemetery.

Dillard, age 80, went to his heavenly home on Sunday, March 21, 2021. He was a lifelong resident of Albany, LA who lived an extraordinary life. It all began when Dillard decided to serve his country by enlisting in the United States Navy where... View Obituary & Service Information

The family of Thomas "Dillard" Stewart Jr. created this Life Tributes page to make it easy to share your memories.

Send flowers to the Stewart family.