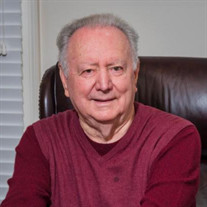 Theodore Joseph "TJ" Dendinger, 85, died on April 21, 2020 from a cerebral hemorrhage. He was the beloved husband of Nelda Parker Dendinger, with whom he shared 63 happy years; father of Theresa (Jim Smith), Elise (Leonard LeBlanc) and Ted; grandfather aka "Atshaw" of Carrie LeBlanc Jones (Aaron) and Ben LeBlanc; and great grandfather of Joseph and Merritt Jones, who brought him great joy. TJ will also be dearly missed by his brother Kenneth (Cynthia) and his extended family and friends. He was preceded in death by his parents Theodore and Vivian Bridges Dendinger, infant brothers Ronald and Rodney, sister Barbara and brother-in-law Bobby Brown. TJ was President of Dendinger Land & Timber Company, owned and operated Dendinger Marine Service, and founded Pelican Outboard Racing Club. A fierce competitor, whether he was running hurdles, racing hydros, showing dogs, or playing croquet, TJ had a burning desire to win. He had a big personality, a great sense of humor, and an impish grin. TJ entertained family and friends with barbecues, seafood boils, jambalaya, and outlandish stories—all of which were true. While inspecting timber tracts and mills with his grandfather "Tiger" and father "Teddy," a teenage TJ learned the family business and acquired their driving habits. He was a local favorite in Region 9 hydroplane boat racing driving A and B hydros and runabouts. His love for tinkering on outboard motors led to his career as a master mechanic, which brought him to Denham Springs. If you were lucky enough to grow up on Sullivan Lane, he probably assembled your swing set, your bike, and may have taught you to ride without training wheels. TJ and Nelda founded Silvertips of Dixie, breeding and showing top winning AKC Samoyeds. They were active in the Baton Rouge Kennel Club for many years. He was an AKC licensed judge. TJ was an excellent dancer. He and Nelda loved to dance the night away at Cave Tangi and the Blue Room. In his later years, TJ enjoyed visiting with his Southeastern High School classmates and Region 9 racing buddies. He organized several reunions, bringing together friends who had been out of contact for 50 years. TJ was a parishioner of Immaculate Conception Catholic Church. Father Frank Uter will conduct a graveside service at St. Joseph Abbey. We look forward to the day we can gather with family and friends to celebrate his life. Memorial donations may be made to Livingston Parish Students Against Destructive Decisions. (115A Hummell Street, Denham Springs, LA 70726)

Theodore Joseph "TJ" Dendinger, 85, died on April 21, 2020 from a cerebral hemorrhage. He was the beloved husband of Nelda Parker Dendinger, with whom he shared 63 happy years; father of Theresa (Jim Smith), Elise (Leonard LeBlanc) and Ted;... View Obituary & Service Information

The family of Theodore Joseph Dendinger created this Life Tributes page to make it easy to share your memories.

Send flowers to the Dendinger family.