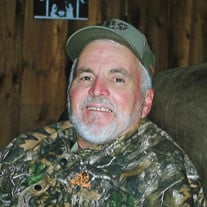 Terry Lavern Herring, age 61, of Independence, Louisiana passed away on February 5, 2022, at North Oaks Hospital in Hammond, LA. He was born March 17, 1960, in Independence, Louisiana. Terry is a graduate of Albany High School. Terry was a heavy equipment operator from time he could drive. He worked with his dad driving dump trucks. Terry worked as a scaffolder until he earned his certifications in heavy equipment and crane work from ABC School. Terry proudly worked in the construction industry for more than 40 years. Terry was a voracious outdoorsman and a fan of all things outdoors, rarely staying inside. He hunted year-round whether it be deer, turkey, or hogs. He was a fan of LSU football (geaux Tigers)and Saint’s football. Terry is survived by his wife of 31 years, Vicky Peplow Herring; son, Jacob Herring; mother, Doris Herring; sister, Laurie Herring Hano (Frankie); brother, Nolan “Moley” Herring; and many other nieces, nephews, great nieces, great nephews, family, and friends. Terry is preceded in death by his father, Marvin Nolan Herring; paternal grandparents, Simpson “Dule” and Vertis Herring; maternal, grandparents, Jesse and Viola Anthony. Relatives and friends of the family are invited to attend a visitation from the chapel of Brandon G. Thompson Funeral Home, 12012 Hwy 190 West, Hammond, on Wednesday, February 9, 2022, from 9:00 a.m. until the start of the Funeral Service at 12:00 noon. Brother Larry Kropog will officiate with interment to follow in Bankston Cemetery. Family and friends are invited back to the Terry and Vicky Herring home for refreshments following the interment.

The family of Terry Lavern Herring created this Life Tributes page to make it easy to share your memories.

Send flowers to the Herring family.