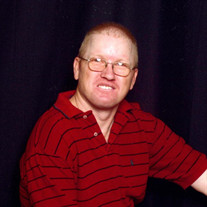 Stephen Leon Harward Stephen, age 46, went to his heavenly home on Sunday, September 12, 2021. He was a precious soul who touch many lives. Stephen never met a stranger. He enjoyed engaging everyone in a good conversation; often slipping in a joke or two. Stephen never met a sport he wasn't interested in. From the summer sports to the winter sports and everywhere in-between, he enjoyed watching each and every one, while participating in the ones he had the opportunity to play. Stephen was both so very proud and so very happy working for the good people at Carter's Supermarket in Springfield for many years. Stephen was an exceptionally loving son, brother, uncle, and friend who is already dearly missed by all who knew and loved him. Although his love for his family gave him the desire to fight the battle he faced at the end, his faith in our Heavenly Father ultimately gave him the comfort he needed to move onto his next journey. Stephen is survived by his loving parents, Bob and Kim Briggs; sisters, Stephanie Peaslee (Lyn), Joey Cooper (Chris), Terri Hays (Justin), Jodie Crozier; brothers, Cody Harward, and Cory Willoughby (Melanie); grandmother, LaNae Herbert; several nieces and nephews which included special bond with Camdyn and Landon. Stephen is preceded in death by his grandmothers, Carol Harward, and Fern Briggs; grandfathers, Victor Herbert, Norman Harward, and Wesley Briggs; niece Chelsea Peaslee; and great friend, Curtis Dykes. Pallbearers for Stephen will be his very own VooDoo Softball Team members and the Coaches. They will have the honor of carrying Stephen to his final resting place. In lieu of flowers, any and all donations will benefit the VooDoo Softball Team; donation may be sent to Brandon Thompson Funeral Home, thank you. Relatives and friends are invited to attend a visitation from the chapel of Brandon G. Thompson Funeral Home, 12012 Hwy 190 West, Hammond on Saturday, September 25, 2021 from 9:00 a.m. until the start of the Funeral Service at 12:00 p.m. Pastor Dallas Stewart and Pastor Nathan Wall will officiate. Interment will follow in Macedonia Baptist Church Cemetery on Macedonia Road in Hammond.

Stephen Leon Harward Stephen, age 46, went to his heavenly home on Sunday, September 12, 2021. He was a precious soul who touch many lives. Stephen never met a stranger. He enjoyed engaging everyone in a good conversation; often slipping in... View Obituary & Service Information

The family of Stephen Leon Harward created this Life Tributes page to make it easy to share your memories.

Send flowers to the Harward family.