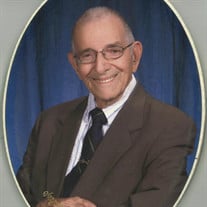 Buster, devoted husband, father, brother, grandfather, great-grandfather, and great-great-grandfather was born on March 25, 1923, in Independence, LA to John and Lena Sampere Guzzardo. He passed away peacefully at his home surrounded by his loving family on Friday, November 26, 2021. He was 98 years old and a native and lifelong resident of Independence, LA. Buster was a member and past Grand Knight of the Knights of Columbus Council 5627, a member and past Commander of the American Legion Post 109, the Saint Joseph Society, the I.I.A.C.A. He was the Grand Marshall of the Italian Festival in 1999 and the Sicilian Heritage Festival in 2011. Buster was a member of Mater Dolorosa Catholic Church and a supporter of Mater Dolorosa Catholic School. He was drafted and inducted into the US Army in January of 1943. Buster entered the European Theatre in the 759th Military Police Company in North Africa, Morocco, and Casablanca. After 29 months, he joined the 295th Engineer Combat Battalion. Buster participated in the battles of Monte Cassino and Anzio in route to liberating Rome. He spent the war in Naples-Foggia, Rome-Arno, Southern France, Rhineland, Central Europe, and Germany. Buster participated in the Battle of the Bulge, escorted prisoners of war to the US, and rescued Jewish prisoners from concentration camps. He escorted General Eisenhower to the front line while in France. Buster was honorably discharged in November 1945 after V.E. Day. He was awarded the EAMETO medal, the Good Conduct medal, and the World War II Victory medal. After a brief stint in the grocery business with his father and brothers, Buster started his public service career. He served 4 years as a board of Alderman in Independence. Buster served 11 years as a Tangipahoa Parish Sheriff's Deputy under Sheriff Tom Sanders. He served 9 years as an elected Louisiana House of Representative for District 72. Buster spent the next 33 years as a Regional Supervisor for the Louisiana Department of Motor Vehicles and Revenue before his retirement. Buster and his wife Sara of 65 years, raised 6 children in Independence. He is survived by his 2 sons, B.J. Guzzardo Jr.. (Faye), Jerome Guzzardo (Julie); his 4 daughters, Madelene Pisciotta (Ronald), Ann Guzzardo, Lorraine Guzzardo, Sara Harrell (John); 17 grandchildren, Rex, Elissa, Ryan, Taylar, and Logan Guzzardo, Sarah Drude, Leslie Cormier, Christopher, Ronald, and Jude Pisciotta, Jessica Finley, Michael and Galan Gagneaux, Amber Trapen, Heather, Eric, and Zachary Harrison; 34 great-grandchildren, Charley, Kendal, and Avery Guzzardo, Noah Conde, Lane Drude, Kady, Chloe, and Hudson Cormier, Lathan McDonald, Brinkleigh, Oaklyn, and Ellie McKee, Sebastian, Christian, Madelene, and Giovanni Pisciotta, Destini Dorsa, Joseph and Joshua Soniat, Grace Finley, Caden and Aubree Gagneaux, Mikey, Bryce, Gianna, and Gabriel Trapen, Benjamin, William, and Isabella Robinson, Loxley Harrison, Jude, Adrian, Mary Claire, and Cassian Pisciotta; 1 great-great-grandchild, Sophia Pisciotta; and numerous nieces and nephews. He was preceded in death by his wife, Sara Campo Guzzardo; parents, John and Lena Sampere Guzzardo; brothers, Joe, Pete, and George Guzzardo; and sisters, Josephine Franciamore, Minnie Garafola, Mary Vilardo, and Carmela Guzzardo. His 10 grandsons will serve as pallbearers. The family wishes to thank his granddaughter, Amber and her husband Mike Trapen and their family for their loving, devoted care given to him for many years. The family would also like to thank the ladies that tended to him daily; Ms. Shirlene Dyson, Ms. Adele Gehbauer, Jasmine Rogers, and Stephanie Brown. Thanks also to the V.A. nurses, home health workers, and the Hospice Specialists of Louisiana. Buster loved God, his family, and country. He never met a stranger and never refused to help a person in need. Buster will forever be remembered for the good he did for his fellow man, his selflessness, generosity, religiousness, caring, and compassion. He took pride and joy in helping others. In lieu of flowers the family requests memorial donations be made to Mater Dolorosa Catholic Church, Mater Dolorosa Catholic School of Independence or the National World War II Museum of New Orleans. Relatives and friends of the family are invited to attend the visitation from the chapel of Brandon G. Thompson Funeral Home, 12012 Hwy 190 W. Hammond, LA 70401, on Thursday, December 2, 2021 from 5:00 p.m. until 9:00 p.m. A Mass of Christian Burial will be held on Friday, December 3, 2021 at Mater Dolorosa Catholic Church at 10:00 a.m. Fr. Reuben Dykes will officiate with interment to follow in Colonial Cemetery. Condolences and other information may be found at www.thompsoncares.com.

Buster, devoted husband, father, brother, grandfather, great-grandfather, and great-great-grandfather was born on March 25, 1923, in Independence, LA to John and Lena Sampere Guzzardo. He passed away peacefully at his home surrounded by his... View Obituary & Service Information

The family of Sebastian "Buster" John Guzzardo Sr. created this Life Tributes page to make it easy to share your memories.

Send flowers to the Guzzardo family.