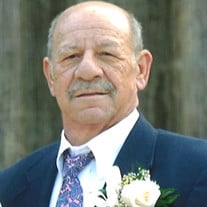 Samuel was called to his heavenly home on Thursday, May 5, 2022, at the age of 71. He was born in Independence, Louisiana and was a resident of Ponchatoula, Louisiana. Samuel served his lifetime in law enforcement, which he was very proud of. He retired after a 36-year career with Weights and Standards. Samuel was also the Assistant Chief for Springfield Police Department and later worked as a Sheriff Deputy at the Tangipahoa Police Department before retiring. Samuel not only protected the people but also protected the country as he was a veteran of the US Army Reserve Military Police. He was also a proud member of The Knights of Columbus Council #4874. His family would describe him as a being a socializing jokester that never met a stranger. He enjoyed having conversations with people and making sure to add a joke or two that would make you laugh. His favorite pastimes were cutting his grass, gardening, and watching football and wrestling. Samuel was a one-of-a-kind guy that will deeply be missed by all who knew and loved him. He is survived by his daughters, Michelle Vilardo and Stacy V. Gainey (Richie); son, Samuel Vilardo II; sister, Sandra Trege (David); grandchildren, Brett Rosa (Lindsey), Alan Gainey, McKenzie Gainey, Marena Rosa, Jade Vilardo, Jenna Vilardo, and Anthony Vilardo; great-grandchild, Amelia Rosa. He is preceded in death by his parents, Anthony L. “Tony” Vilardo and Rena M. Canzoneri Vilardo; grandparents, Sam and Stella Spera Vilardo, Sam and Sarah Provetere Canzoneri. Relatives and friends are invited to attend the visitation on Tuesday, May 10, 2022, held in the chapel of Brandon G. Thompson Funeral Home, 1190 Hwy 51 North, PONCHATOULA, beginning at 9:00 a.m. until the funeral service at 12:00 p.m. The interment will follow in Colonial Cemetery.

Samuel was called to his heavenly home on Thursday, May 5, 2022, at the age of 71. He was born in Independence, Louisiana and was a resident of Ponchatoula, Louisiana. Samuel served his lifetime in law enforcement, which he was very proud of.... View Obituary & Service Information

The family of Samuel Anthony Vilardo Sr. created this Life Tributes page to make it easy to share your memories.

Send flowers to the Vilardo family.