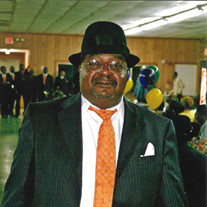 On Wednesday, July 8, 2020, our cookie crumbled, as best described by Rob’s youngest daughter, Sara. Robert Stanley Warner, Sr. husband and father of five children, passed away at age 67. Born on April 9, 1953 in Bogalusa, LA, Robert, or more affectionately nicknamed “Big Rob,” was the seventh son of Oree and Wilhelmina (Carson) Warner. Rob received his Bachelors degree in Business Administration from Southeastern Louisiana University. While attending SLU, he played rugby--a notable life choice for a Black man from South Louisiana. Establishing a wonderful career at Exxon, Rob worked as an offshore mechanic and eventually transferred to executive management with the company prior to his retiring after more than 30 years of service. Never one to sit still, when Rob was not offshore, he sold cars at Durham Autoplex and Dixie Automotive--he bought a lot of cars too. While neither could officially remember their anniversary, Rob married Linda Jenkins Warner August 2, 1980. Rob had five children he called the “F-Troop” (he watched far too much television): Kristen, Robert Jr. (Evelyn), Meredith “Mary Lea,” Renard Williams, and his forever baby, Sara. He is Paw-Paw to his two grandchildren, Brooklynn Anaya and Christian. Big Rob loved Young and the Restless, Bold and the Beautiful and anything that came on Channel 4--this included 48 Hours AND Love Island, cooking seafood gumbo, serving the greater Tangipahoa community with the North Tangi Support group, attending Kentwood football games, traveling across the country with his siblings on our annual family reunions, shopping the sales at Dillard’s as well as every grocery store that sold gumbo mix, and enjoying an eclectic mix of music from zydeco and Top 40 to the Blues--if you ever rode in the car with Rob you knew you would never know what would come through the speaker. Rob was preceded in death by his parents, Oree and Wilhelmina (Bill), his brothers Eugene and Clyde, his sisters Mary (Obaby) Barnes, Diane and Shirley. He is survived by his wife, Linda, his five children,two grandchildren, his brothers Charles, Aubrey (Janice), Darrell (Glenda), William (Evata), and Albert, his sisters Faye and Anita as well as a host of nieces and nephews and long time friends. Relatives and friends are invited to attend the Visitation at Brandon G. Thompson Funeral Home, 12012 Hwy. 190 West, Hammond, LA on Tuesday, July 14, 2020 from 10AM until NOON. The Funeral Service will begin in the funeral home chapel at NOON. Interment will follow at Holly Gardens Cemetery, Hammond, LA. At the service we ask that guests practice social distancing and wear masks. In lieu of flowers, the family asks that you make donations to the Richard Murphy Hospice House. 1109 Chestnut St., Hammond, LA 70403. Condolences may be offered at www.thompsoncares.com.

The family of Robert Stanley Warner Sr. created this Life Tributes page to make it easy to share your memories.

Send flowers to the Warner family.