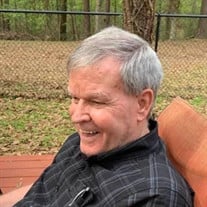 Much-loved husband, father, grandfather, great-grandfather, and uncle, Robert Earl "Pete" Williamson, age 80, went to be with our Lord on Monday, November 29, 2021, at his home in Hammond, LA. Born on March 1, 1941, in Springhill, LA, Pete graduated from Amite High School and Southeastern Louisiana University, earning graduate degrees in education. He was a teacher, coach, and principal in Tangipahoa Parish and other public schools for many years and enjoyed refereeing basketball at both the high school and college levels. Pete loved sports, especially basketball, and his children treasure the memories of playing basketball, baseball, and football with him in the backyard. After he became a grandfather, he attended his grandchildren's sporting events all over the state and country. Pete also loved serving God through his church and by treating all humans with dignity and respect. He enjoyed travelling with his wife, Stella, before he became ill. Pete is survived by his wife, Stella Tate Williamson; children, Trina Derenbecker (John), Sonya Tracey; grandchildren, Robert Derenbecker (Theresa), Olivia Cannizaro (Garrett), Hannah Abercrombie (Wesley), Parker Derenbecker (Elizabeth), and Rebecca Tracey; and great-grandchildren, Cora, Winston, and Laney Derenbecker. He is also survived by his sisters-in-law, Mary Stewart (George), Ann Chapman; and brothers-in-law, Bennie Tate (Rebecca), and Jimmy Abernathy (Patsy). He is preceded in death by his first wife and mother of his children, Betty Sue Abernathy Williamson; son, Robert Kyle Williamson; grandson, Matthew Pierce Derenbecker; nephew, Nathan Richard Tate; and his parents, William Pierce Williamson and Vivian Duncan. In lieu of flowers, donations may be made to the Alzheimer's Association at the Alzheimer's National Processing Center, PO Box 96011 Washington D.C. 20090-6011 or at act.alz.org/donate, or to a charity of your choice. The family would like to extend a special thanks to Ted Hudspeth, M.D., and to the staff at Home Instead for the compassionate care they provided. Relatives and friends of the family are invited to attend the visitation from the chapel of Brandon G. Thompson Funeral Home at 12012 Hwy 190 W. Hammond, LA 70401, on Thursday, December 2, 2021 from 9:00 a.m. until the funeral service at 11:00 a.m. Pastor Bob Adams will officiate and interment will follow in the Amite-Arcola Presbyterian Church Cemetery.

The family of Robert Earl "Pete" Williamson created this Life Tributes page to make it easy to share your memories.

Send flowers to the Williamson family.