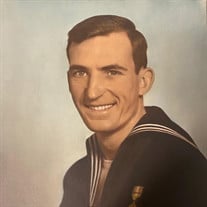 Reginald “Reggie” Joe Arnold Reggie Joe Arnold, age 74, native and resident of Denham Springs, passed away peacefully at home on Sunday, March 7, 2021, surrounded by family. Reggie was a veteran, serving four years in the United States Navy. He met his wife, Sylvia Timmons Arnold in 1968 and was married in 1970. Reggie and Sylvia had two sons, Jeffrey and Jason. Reggie began his career at Exxon in 1970 where he would retire with 33 years of service. Reggie was a devoted husband, father, and grandfather. He loved to tell stories, spend time outside, and visit with his granddaughters, all while sipping a glass of sweet tea. He will be remembered for his strong will, enormous heart, and his love for family. Reggie was preceded in death by his mother and father, Billy and Virgie Arnold and his sister, Susan Lockhart. Reggie is survived by his wife Sylvia Arnold; his sons, Jeffrey Arnold and wife Shannon, Jason Arnold and wife Johanna; his grandchildren, Courtney and Kaylee Arnold; and several nieces and nephews. Visitation will begin at 10:00 a.m., Wednesday, March 10, 2021, and will continue until the funeral service at 11:00 a.m. at First United Methodist Church of Denham Springs. Interment will follow at the Denham Springs Memorial Cemetery. The family would like to thank Hospice of Baton Rouge and Doctor Michael McCarthy for their devotion to Reggie’s care and well-being during his illness. In lieu of flowers, the family requests donations be made in Reggie’s memory to First United Methodist Church of Denham Springs. The family sends a special thanks to the pallbearers: James Hope, Tommy Lockhart, Brandon Lockhart, Joe Courtney, Mark Lee, and Aaron Hope. Honorary pallbearers: Joel Smith, Glenn Watts, VL Roof, Barry Smith, and Tom Menear.

The family of Reginald Joe Arnold created this Life Tributes page to make it easy to share your memories.

Send flowers to the Arnold family.