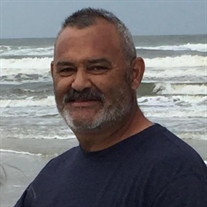 Peter, age 55, passed away on Friday, September 3, 2021. He was a longtime resident of Independence, where he graduated High School back in 1984. Peter served his country in the United States Navy, serving from 1987 until he began his civilian career with the United States Postal Service, where he ultimately retired. He was a skilled hunter, fisherman, and gun-collector. Peter's favorite activity was just hanging out with his family and grandchildren. When he wasn't with them, you could often find him either shooting some of his guns, dancing to some of his favorite tunes, or taking a well-deserved vacation. Peter was a loving husband, father, grandfather, son, and friend who is already dearly missed by all who knew and loved him. Peter is survived by his loving wife of 25 years, Karen Woolever Calagna; daughters, Katherine Dephillips (Marcus), Kelly Calagna, Jennifer Jenkins (Lawrence), and April Sturm; son, Greg Sturm (Bliss); mother, Cynthia Noe Calagna; sister, Tammy McCutcheon; grandchildren, Trevor, Natalie, Briley, Tynlee, Clayton, Kinsley, Brantley, Tyelin, Colbie, Marcus, Jacob, Levi, Sierra, Slade, Kenzie, Paisley, and Kaide. Peter is preceded in death by his father, Joseph Peter Calagna. Family and friends are invited to attend a visitation from the chapel of Brandon G. Thompson Funeral Home, 12012 Hwy 190 West, Hammond on Thursday, September 16, 2021 from 6:00 p.m. until 8:00 p.m. Visitation will resume on Friday, September 17, 2021 from 9:00 a.m. until the rendering of Military Honors at 11:00 a.m. followed by a Funeral Service. A private burial will immediately follow in the Southeast Louisiana Veterans Cemetery in Slidell. Pallbearers: Greg Sturm, Clayton Sturm, Lawrence Jenkins, Trever Jenkins, Marcus DePhillips, Cody Calagna, Marshall Pierre, and Joseph Woolerer.

Peter, age 55, passed away on Friday, September 3, 2021. He was a longtime resident of Independence, where he graduated High School back in 1984. Peter served his country in the United States Navy, serving from 1987 until he began his civilian... View Obituary & Service Information

The family of Peter Marion Calagna created this Life Tributes page to make it easy to share your memories.

Send flowers to the Calagna family.