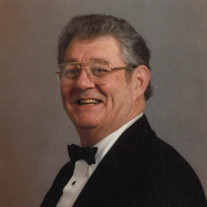 Percy Franklin Kuhn Percy, age 86 went to be with the Lord on Thursday, March 19, 2020. He was a recent resident of Brookdale Senior Living, Mandeville, LA having moved there from Dalton, MA where he lived for many years. He was born in Tylertown, MS on October 9, 1933, graduated from Hammond High (1952) and enlisted in United States Air Force achieving the rank of Technical Sergeant and was a member of the American Legion Post #47. Percy was a graduate of LSU with a degree in Electrical Engineering. He worked for General Electric as an EE supporting US missile systems on nuclear submarines. Retiring from GE, Percy continued to support the US and United Kingdom Navies as a consultant in submarine weaponry. In 2013, he was recognized at the Pentagon for 50 years of service to the U.S. Navy Strategic Systems Programs. During his tenure with the Navy, Percy supported missile systems on board 34 US Navy nuclear submarines such as the USS Thomas Edison and the USS Lewis and Clark. Percy was a well-respected Master Mason initiated in 1967 at Dorchester Lodge #369 in Charleston, S.C. Percy joined Unity Lodge in Dalton, MA, Globe Lodge in Hinsdale, and Evening Star Lodge in Lee, MA. During his 53 years in the Masons, he served in a number of offices including Master of Unity Lodge, becoming District Deputy Grand Master of the Pittsfield 16th Masonic District of the Grand Lodge of MA. Percy was active in the Order of Eastern Star. He was initiated into Berkshire Chapter No. 81 in Dalton, MA in 1979. Later, Percy joined the Morning Star Chapter No. 281 in Lee, MA where he served as Worthy Patron on seven occasions. Percy was appointed as Grand Representative to Louisiana from Massachusetts (1989 -1991) and was elected Grand Sentinel in 1989. He was elected Worthy Grand Patron of Massachusetts Order of Eastern Star in 1993. Percy was President of the Berkshire Gas & Steam Engine organization, as gas and steam engine collectors and received their Membership of Merit Award. Percy is survived by his daughter, Susanne Kuhn Howell, grandson, Daniel Pic, sister, Katherine Kuhn Billings, and brothers Thomas, Albert, James, and Marion Paul Kuhn. He was preceded in death by his wife Shirley Daniels Kuhn, his parents Eton Percy and Mildred McDaniel Kuhn, brother Robert L. Kuhn, sisters Edith M. Kuhn White and Myra L. Kuhn Ramsey. Due to the current order by Gov. Edwards, the family is not able to invite the public to a visitation and funeral service as intended. Mr. Percy will be laid to rest at Parklawn Cemetery. In lieu of flowers it is requested that donations be sent to the Shriners Hospitals for Children (P.O. Box 1525, Ranson, WV 25438 or www.shrinershospitalsforchildren.org

Percy Franklin Kuhn Percy, age 86 went to be with the Lord on Thursday, March 19, 2020. He was a recent resident of Brookdale Senior Living, Mandeville, LA having moved there from Dalton, MA where he lived for many years. He was born in Tylertown,... View Obituary & Service Information

The family of Percy Franklin Kuhn created this Life Tributes page to make it easy to share your memories.

Send flowers to the Kuhn family.