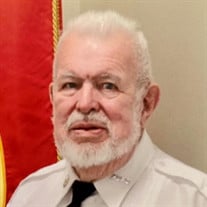 Owen Leonard “Sonny” Joiner Jr., a loving husband, father, and grandfather, passed away peacefully on Wednesday, September 8, 2021 at his home, at the age of 81. He was a lifelong resident of Ponchatoula, Louisiana, a member of the Masonic Pine Grove Lodge #288 of Ponchatoula, and a United States Navy veteran. He was a lifetime member of the Ponchatoula Volunteer Fire Department, serving as chief from 1976-1978, and proudly held the title of the 2000 Ponchatoula Strawberry Festival Grand Marshal. Sonny was a 1958 PHS graduate, where he was a star football player and attended Southeastern Louisiana University on a full football scholarship. He had a stellar work ethic, which is reflected by his retirement from both LP&L and Valero, where he was employed as an electrician. Although he was known to be stubborn, he was a kind and generous soul. He was quick witted, with a great sense of humor and loved telling jokes. Some of his fondest memories were of the fun times he had, surrounded by his family and friends on the Tangipahoa River. Sonny is survived by his wife, Margaret Brown Mckneely Joiner; son, Stormy Joiner and wife Monique; stepdaughters, Melanie Taylor, Martha Thompson and husband Brandon, Emily Matise and husband Danny; grandchildren, Dillon Joiner and wife Kayla, Madison Carpenter, Lauren Gaudin and husband D.J., Gabrielle Taylor, Madison Thompson, Tori Thompson, and Brandon Thompson Jr.; great-grandchildren, Adeline and Annie Gaudin; former daughter-in-law, Lesley Palisi; former son-in-law, Robert Taylor. He was preceded in death by his first wife, Melba Coon Joiner; son, Shannon Joiner; parents, Owen and Betty Joiner. Relatives and friends of the family are invited to attend the funeral service from the chapel of Brandon G. Thompson Funeral Home in Ponchatoula, 1190 Hwy 51 North Ponchatoula LA 70454, on Sunday, September 12, 2021 at 2:00 pm, with the visitation beginning at 12:00pm and the Masonic ceremony at 1:30 pm. Interment will follow in Sandhill Cemetery.

Owen Leonard &#8220;Sonny&#8221; Joiner Jr., a loving husband, father, and grandfather, passed away peacefully on Wednesday, September 8, 2021 at his home, at the age of 81. He was a lifelong resident of Ponchatoula, Louisiana, a member of... View Obituary & Service Information

The family of Owen "Sonny" Leonard Joiner Jr. created this Life Tributes page to make it easy to share your memories.

Send flowers to the Joiner family.