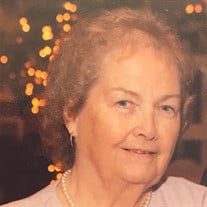 Mitsie, age 84, went to her heavenly home Wednesday February 5, 2020. She was a longtime resident of Springfield and Ponchatoula. For over 40 years she was the Secretary for Springfield Elementary School. What brought her the most joy was volunteering to keep the scorebook for the Springfield High Basketball teams for many years. She served her community as an active member of Eastside Baptist Church, an active member of MADD, a local speaker for the Victim Impact Panel for DWI Offenders, and also as a first responder with the Livingston Parish District 2 Volunteer Fire Department since 1998. Mitsie was loved by all that knew her and she considered the children who attended Springfield Elementary as her ‘adopted’ children. She served others by preparing food for the sick church members and for families who lost loved ones. When Mitsie was relaxing at home you could often find her watching sports on TV, sewing, or doing calligraphy. Mitsie is survived by her loving husband, Albert ‘Sonny’ Starkey; daughters, Joy Sue Winburn (Chester), Cynthia Smith Boe’ (Kirk); sisters, Nancy ‘Billie’ Dunhurst (Charles), Bette Mae Whisler; grandchildren, Ricky Winburn (Mindy), Ches Winburn (Kayla), Ashley Boe’ Belanger (Wesley), Nicole Boe’ Howell (Christopher); great-grandchildren, Caroline Winburn, Christian Winburn, Madelyn Winburn, Elliana Howell; and four nephews and their families. Mitsie is preceded in death by her parents, Raymond and Evabelle Frazier; and son, Ricky Joseph Smith. Relatives and friends are invited to attend the Visitation at Brandon G. Thompson Funeral Home, 12012 Hwy 190 West, Hammond, LA on Monday, February 10, 2020 from 5PM until 9PM and again Tuesday, February 11, 2020 from 9AM until 11AM. The Funeral Service will begin at 11AM. Interment will follow at New Palestine Baptist Church Cemetery, Picayune, MS. In lieu of flowers the family has established the Mitsie Starkey Memorial Scholarship to benefit a student athlete at Springfield High School. Contributions can be made at Hancock/Whitney bank in her memory. Condolences and other information are available online at thompsoncares.com. Arrangements have been entrusted to Brandon G. Thompson Funeral Home.

Mitsie, age 84, went to her heavenly home Wednesday February 5, 2020. She was a longtime resident of Springfield and Ponchatoula. For over 40 years she was the Secretary for Springfield Elementary School. What brought her the most joy was volunteering... View Obituary & Service Information

The family of Mitsie Sue Starkey created this Life Tributes page to make it easy to share your memories.

Send flowers to the Starkey family.