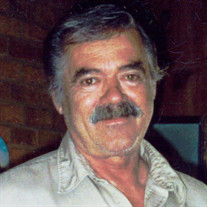 Mr. Marion Joseph “Butch” Favre, of Robert, LA, passed away peacefully Friday, September 17, 2021 at home surrounded by his family. He is proceeded in death by his father Jesse Favre, mother Justine Favre, sisters Laverne Sork, Gladys Necaise, Elaine Favre Cestone, Rita Hundley and Marilyn Potts, brothers Alton Favre, Douglas Favre and Anthony Favre, daughter Melanie Gauthier, son Charles Favre and grandson Chad Ledet, Jr. He is survived by his wife of 28 years Velma Favre, son Larry Favre and stepson Chad Ledet, Sr. sister Janet Clark, brothers Thomas Favre and Larry Favre. He was Pop to eight grandchildren- Joe Gauthier, Cord Gauthier, Jayden Dufrene, Courtney Ledet, Lindsey Ledet Wilson, Amber Ledet, Caroline Favre and Magan Favre, and several great grandchildren. He was beloved Uncle Butch to his many nieces and nephews. Butch was born in Kiln, Mississippi on October 17, 1942. He graduated from Hampton High School in Hampton, Virginia and enlisted in the U.S. Army. He was stationed at Ft. Myer in Arlington, Virginia and had the honor of serving in President John F. Kennedy’s inauguration. After working for the CIA, Butch returned to his home in Kiln, Mississippi. He became a long time resident of Marrero, Louisiana and retired from Stewart Construction. His grandchildren were the lights of his life and he will be greatly missed by them. He was a master of building and creating things with his hands and leaves a legacy of loving country music, Elvis and his family. Special thanks to Ryan, Annie and Chaplain Chris from St. Joseph’s Hospice. Brandon G. Thompson Funeral Home in Hammond, Louisiana is in charge of arrangements. Service information is being developed by the family and will be posted as soon as it becomes available. Please check back. Sincerely, Your friends at Brandon G. Thompson

The family of Marion Joseph Favre created this Life Tributes page to make it easy to share your memories.

Send flowers to the Favre family.