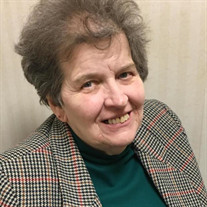 A Memorial Mass will be held, at 11am, Saturday, February 19, 2022, at Sacred Heart of Jesus Catholic Church in New Iberia, to celebrate the life of Marie O. “Nettie” Chauvin (also, known as Aunt Nettie - she would talk to, play with, rock any child; and as, Momma Nettie - to friends of Kim and Brother). Interment will be held at a later date. She died peacefully, early Christmas morning, December 25, 2021, with Kim by her side, at The Butterfly Wing - Hospice of Baton Rouge, LA at the age of 83, succumbing to complications of a multi-year battle with Alzheimer’s Disease. She was born on September 27, 1938, to W.L. (Bill) and Martha (Maw) B. Olivier. Nettie retired from Voorhies Supply in New Iberia, after 31 years of service as the Director of Purchasing; and then worked as a Property Manager for Champion Real Estate Services and Stirling Properties, and became a licensed Realtor/ Broker in the Lafayette, LA area for several years. Prior to moving from New Iberia to Lafayette, she was member of the St. Ann's Altar Society, loved reciting the Rosary, attending daily Mass and silent retreats with her daughter and other family members, at Our Lady of the Oaks Retreat House in Grand Coteau. Her favorite pastimes - Scrabble with her mother and other family members; countless hours of Double Solitaire with her bestie, Joyce, and older granddaughters; and Concentration when the grandchildren were younger. And, she was always up for a trip with her brother, Louis, to any flea market and Chinese for lunch. She represented Acadiana and Louisiana in the Senior Olympics as an officer on the board of directors, a volunteer and a competitor. She excelled in the events of pickle-ball, shuffleboard, badminton, and ping pong, as evident by the hundreds of medals she accumulated over the years; and in earlier years, enjoyed playing tennis and bowling. She is survived by her daughter, Kim Chauvin of Baton Rouge and a son, Danny “Brother” Chauvin and his wife Jennifer, of Pearland, Texas. Affectionately known as “Grandmommas”, she is also survived by her five grandchildren, Christen Patin and her husband David, Danielle “Dani” Chauvin, Joshua “Jeaux” Chauvin, Claire Chauvin and Phillip “P.D.” Chauvin. Survivors also include her sisters, Mary Christiansen (of Colorado Springs, CO) and Rosa Maynard and her husband Bill; brothers, Louis Olivier, and George Olivier; numerous nieces and nephews, all of whom, she adored; dear friend, Belinda Johnston of Baton Rouge; and her best friends, Joyce and Jack Chamberlain of Broken Arrow, OK. In addition to her parents, she was preceded in death by her husband, Daniel Chauvin Sr.; sisters, Maria (MeMe) Hebert, Cecile Halphen, Sadie Fremin, Jeanne Romero (of Houma), and brother W.L. (Linus) Olivier, Jr. Marie Chauvin was transferred, early Christmas Eve morning from St. Clare Manor Nursing Facility to The Butterfly Wing - Hospice of BR. Mom’s passing was quite beautiful and prior to doing so, we listened to Andrea Bocelli’s Christmas performance of Ave Maria, his duet of The Prayer, then The Lord’s Prayer (the Our Father) and Amazing Grace. Not surprisingly, as Christmas was Mom’s favorite Holiday (and each year, if we did nothing else, going to Christmas Mass with her, was the greatest gift we could give her), that after Kim recited several Rosaries, holding her hand or touching her forehead, all the while… and with Midnight Mass, celebrated by the Holy Father, Pope Francis, televised from the Vatican (quietly in background), shortly after midnight, she slipped quietly and peacefully, into eternal life. Kim then subjected her to a cappella of Amazing Grace and Be Not Afraid (sorry Mom, it’s the thought that counts, right?), notified the Nurse, and official time of death was Christmas Day at 12:20am. Earlier, Christmas Eve, it was suspected that Mom thought it would be pretty cool to hitch a ride, with Santa, up to Heaven. Interment will be at Holy Family Cemetery in New Iberia, LA. In lieu of flowers, donations may be made to the Alzheimer’s Services of the Capital Area (AlzBR.org); St. Vincent de Paul (SVdPBR.org); St. Jude Children’s Hospital (StJude.org).

A Memorial Mass will be held, at 11am, Saturday, February 19, 2022, at Sacred Heart of Jesus Catholic Church in New Iberia, to celebrate the life of Marie O. &#8220;Nettie&#8221; Chauvin (also, known as Aunt Nettie - she would talk to, play... View Obituary & Service Information

The family of Marie O. Chauvin created this Life Tributes page to make it easy to share your memories.