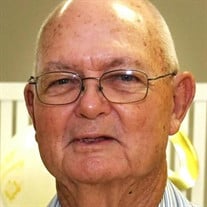 Billy passed away peacefully on Monday, June 8, 2020, at the age of 86. He was born and raised in Ponchatoula, LA where he was known to be a loving, caring and easy-going man who loved and adored his family. He worked construction for 40 years at Millwright Local 720 and was a member of Jerusalem Baptist Church. Billy was a “Jack of all trades,” a handyman that enjoyed working in the yard, fixing things and spending time in his “shed”. Billy was known for his legendary “One-liners,” and could always make people laugh with his stories (which were many). During his spare time, he enjoyed going to his brother-in-law’s camp in Cocodrie, LA and fishing. Billy would start his morning by enjoying coffee and the newspaper on the porch with his wife and ending the day by reading his kindle and watching the 10 o’clock news with ice cream. He was an avid reader who enjoyed old western and mystery novels. He also enjoyed listening to Blue Grass music and Emmylou Harris. Billy was a one of a kind man who would give his all and expect nothing in return. He is survived by his loving wife of 60 years, Claudette Faulk McCrory; daughter, Carla Sue McCrory; sons, Jules Earl McCrory Jr.(Marcia), Ricky Wayne McCrory (Djulene), James William McCrory (Cynthia), David Paul McCrory; sister, Merol Lee Guilmino; brother, Sebren Virgil Strother; grandchildren, Jacob Earl Farmen, Emily Lynn Dougay, Gary “Bud” Dougay, Brayden James McCrory, Lindsay McCrory, Shannon McCrory, Keaton McCrory, Brian Guthrie, Ricky McCrory Jr., Rachelle McCrory; and numerous nieces and nephews.Billy is preceded in death by his grandparents, Millard V. McCrory and Florence McCrory; mother, Florence Beatrice Strother; brothers, Thomas David Kelley and Lancey Strother; Sons, Gregory Joseph McCrory and Peter William McCrory.Special thanks to North Oaks Hospice Nurses and Staff, Dr. David Oubre (Oncologist), Dr. Stephen Graham (Urologist) and Dr. S. Tahseen Rab (Nephrologist).Friends and family are invited for a visitation on Saturday, June 13, 2020 at Jerusalem Baptist Church starting at 10:00 a.m. until the beginning of the Funeral Service at 12:00 p.m. Dr. Phil Weaver will be officiating. Interment will follow at Wetmore Cemetery in Ponchatoula. Pallbearers include; Kevin Moore, Ricky Moore, Brayden McCrory, Gary "Bud" Dougay, Bobby Dale Moore and James Jones.

Billy passed away peacefully on Monday, June 8, 2020, at the age of 86. He was born and raised in Ponchatoula, LA where he was known to be a loving, caring and easy-going man who loved and adored his family. He worked construction for 40 years... View Obituary & Service Information

The family of Jules "Billy" Earl McCrory Sr. created this Life Tributes page to make it easy to share your memories.

Send flowers to the McCrory family.