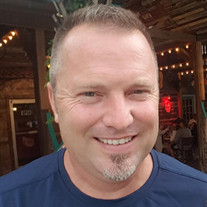 Josh, age 47, passed away on Thursday, December 9, 2021 He was formerly a resident of Centralia, IL and a current resident of Holden, LA and southern by choice. He worked as an HVAC Supervisor with NCSG. Josh enjoyed the outdoors and loved going on sporadic adventures with his wife Kim. He liked to ride his Harley or be on the river with his friends and family. Josh was extremely talented painting cars and could build just about anything. He was most happy surrounded by his friends and family would do anything for anyone he loved. Josh was truly a remarkable man with a heart of gold and will be forever missed. "Love You Main" Josh is survived by his wife Kim Williams; daughter, Emily Williams; stepson, Ryland Rombough (Jenna); mother, Cindy Altenbaumer (Gary); father, Butch Williams (Cathy); brother, Ethan Williams (Lynette); grandchildren, Waylon Rombough, Bylee Williams, Beau Rombough; uncle, Jeff Hickey (Lauri); cousins, Michelle, Zephra, Abbey, Zakery; brother-in-law, Rick Trowbridge; sisters-in-law, Stacy Trowbridge (Rhonda), Kimmie Miller (Josh), Angie Trowbridge; several step-siblings; and numerous friends that are considered family. He is preceded in death by his sister, Stephanie Williams; and grandmother, Shirley Hickey. In lieu of flowers the family requests that donations be made to the funeral home to help aid the fight for change in the safety protocol of the river in order to prevent future accidents and fatalities. The family would like to extend a special thank you to all those individuals that dedicated countless hours and effort in the search for Josh. It could never be repaid. Relatives and friends of the family are invited to attend a visitation from the chapel of Brandon G. Thompson Funeral Home, 12012 Hwy 190 W. Hammond, LA 70401, on Saturday, December 18, 2021 from 10:00 a.m. until the Memorial Service at 12:00 p.m.

Josh, age 47, passed away on Thursday, December 9, 2021 He was formerly a resident of Centralia, IL and a current resident of Holden, LA and southern by choice. He worked as an HVAC Supervisor with NCSG. Josh enjoyed the outdoors and loved going... View Obituary & Service Information

The family of Josh Williams created this Life Tributes page to make it easy to share your memories.

Send flowers to the Williams family.