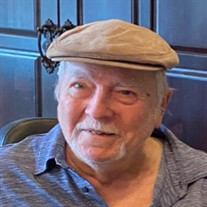 On Tuesday, December 15, 2020, John Richard Wiley, loving son, husband, father, grandfather and great-grandfather passed away. John was born on September 6, 1936, in Costa Mesa, California to Genevieve Hughes Wiley and Charles Wiley. After living in many different areas of the country as he grew from boy to man, he followed his father’s footsteps in learning carpentry. When he was drafted into the Army, God had his path created for him. In the Army, John continued learning and became a Master Carpenter and realized his passion was working with his hands and teaching others the skill of carpentry. He loved his profession and taught these skills to his three children, which each followed in his footsteps in their own and unique way. They too, acquired the same passion for construction and continue today using these skills. On January 31, 1962, he married the love of his life, Betty Carroll Wiley, and they were a model of marriage for their children and grandchildren throughout their 58 year marriage. John relished gatherings with family and friends. He enjoyed going on outings for dinner, watching movies, playing card games, or spending a day at the Casino. He enjoyed every one of these moments, conversations, and experiences as nothing else could make him any happier. He was known by all that knew him for his loving and caring personality. Although he was quiet, he was always listening and chiming in with his sweet words of wisdom at the right moment. John will be missed by all that know him. Still, the lessons and caring hand he yielded to his family and friends will live on for many generations. John is preceded in death by his father, Charles Wiley, his mother, Genevieve Hughes, brothers David, Raymond and James Wiley. He is survived by his loving wife Betty Carroll Wiley; three children, Sandy Wiley Perret and husband Ernie, Scott Wiley and wife Gina and Tommy Wiley; grandchildren Jessica Perret Gagliano and husband Clint, Brandy Perret Kugler and husband Jonathan, Danielle Wiley Sibley and husband Anthony, Tayler Wiley, Kenneth Ockman and wife Sarah, Keith Hebert, Devin Breaux James and husband Kelvin, Daryian Wiley Tisdale and husband Zach; nineteen great-grandchildren; his brothers Leonard and Bobby Wiley, Lee and Ray Banks; sisters Francis Doll, Marfa Delainey, Mary Keiser, and Mae Gabriel along with several cousins, nieces, and nephews. Relatives and friends of the family are invited to attend the Visitation at Brandon G. Thompson Funeral Home, 1190 Hwy. 51 North, Ponchatoula, LA, on Saturday, December 19, 2020 from 1PM until 3PM. The Funeral Service will follow in the funeral home chapel at 3PM.

The family of John Richard Wiley created this Life Tributes page to make it easy to share your memories.

Send flowers to the Wiley family.