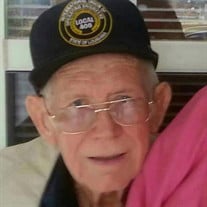 John Huey Pigott, named after Louisiana Senator Huey Long, who was also known as " Bo" or "Cotton" (Cotton because of his mop of platinum blonde hair as a toddler and young child before his hair turned black), age 94, went to be with his Lord on Friday, August 6, 2021, at his family residence in Springfield, LA. Our Daddy was born on June 22, 1927, in the home in which he passed and was a life-long resident of Livingston Parish. As a young teen, our dad dreamt of how to repair a Model T, to the dismay of his parents, as he immediately went to see if what he learned in his dream were true and began to disassemble the engine, and that began his life path and passion for repairing anything mechanical. His chosen career was of a highly recognized and well known heavy-duty mechanic. John (Daddy) was a longtime member of Springfield First United Methodist Church, and we know he is happily celebrating his reunion with family and friends in Heaven. He was a proud member of Operating Engineers Local #406 in New Orleans, LA, a member of Woodmen of the World, and last, but by no means least, a member of Sons of AMVETS squad No. 68 of Springfield, LA. Our father was a true patriot and supporter of the military. A diagnosis of a disqualifying medical condition prevented him from fulfilling his desire to serve in the Armed Forces, as did his ancestors as far back as the Revolutionary War. Speaking of the 1700s, Daddy carried on a time-honored family tradition of making sugar cane syrup. John was an avid gardener and had a mission of picking up stray puppies and kittens to love and give a good home. Another accomplishment of which he was very proud, was his ability to take family members flying in the small plane he owned when he lived in Las Vegas. Our father was a generally serious, but good-natured person, but he had his moments when the clown emerged. We recently found a photo with Daddy at our annual Christmas Eve party with a large bow adorning his head. At wedding receptions, he imagined he was a mixture of Bing Crosby and Fred Astaire, which was always fun to watch. John is survived by a son, John S. Pigott (born of his first marriage to Augustine Poche) and wife Evelyn of Springfield; his daughter, Shawn Ann Pigott (born of his marriage to Veronica DeMolle) of Canton, MS; two foster sons, Patrick McKeen of Alaska and David Gaines of AZ; grandchildren, Erika Pigott Beardon of OK, Rochelle Miles of LA, Cordelia McCarter of LA, and Sissy Bickford of LA; and beloved great-grandchildren, nieces, nephews, and friends. Dad is preceded in death by his wife of 65 years, Veronica DeMolle Pigott; infant son, Will Kevin Pigott; parents, John S. Jr. and Octavia Hoover Pigott; sister, Artemeas Pigott; brother, Lucien Pigott and wife Wilma; and grandchild, Richard McCarter. Relatives and friends of the family are invited to attend the visitation at the chapel of Brandon G. Thompson Funeral Home, 12012 Hwy 190 W. Hammond, LA 70401 on Sunday, August 15, 2021 from 10:00 a.m. until the funeral service at Noon. Doctor Sam Morrison will officiate and interment will follow at Carter Cemetery in Springfield, LA.

John Huey Pigott, named after Louisiana Senator Huey Long, who was also known as " Bo" or "Cotton" (Cotton because of his mop of platinum blonde hair as a toddler and young child before his hair turned black), age 94, went to be with his Lord... View Obituary & Service Information

The family of John Huey Pigott created this Life Tributes page to make it easy to share your memories.

Send flowers to the Pigott family.