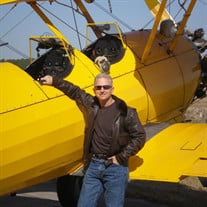 John Joseph Dufreche died peacefully on Tuesday, March 31, 2020, after an illness with dementia. John was born on November 11, 1959, and was a life-long resident of Ponchatoula. After graduating from Ponchatoula High School, John enlisted into the United States Navy and completed Naval Aviation Officer Candidate School. He served a total of 24 years (8 years active duty and 16 years reserve) as a Naval Aviator flying the P-3 Orion maritime patrol aircraft. He proudly retired from the Navy in 2007 at the rank of Lt. Commander. John was hired as a pilot for Federal Express in 1994, where he remained an employee until his death. He was a member of St. Joseph’s Catholic Church where he served as a Eucharistic minister and one term on the Parish Advisory Council. John was an avid outdoorsman and enjoyed flying his 1943 Stearman Aircraft, golfing, fishing, and hunting. Above all else, John was a true family-man and enjoyed spending time with his family and friends, where he was always the life of the party. John is survived by his devoted wife of 33 years, Michele Brock Dufreche, his beautiful daughter, Aimee Campo (Trey), and two amazing sons, Justin and Scott. John became a first-time grandfather on January 21, 2020, when his grandson, John Peter Campo, was born. John leaves behind brothers William “Billy” (Glenda), Danny, Tommy, and Scott (Katrina), along with his sister Patrica “Sissy” (Duke), as well as, loving father and mother-in-law Eric and Betty Jo Brock, brothers-in-law, Joe Brock (Barbara), Michael Brock (Lisa), Kevin Brock (Ana) and sisters-in-law, Angie Brock Cunningham (David) and Janet Dufreche, numerous cousins, nieces, nephews, and friends. He is preceded in death by his parents Cyprian “Buddy” Dufreche and Patricia Perkins Dufreche, and brothers Lt. Edward Dufreche and former Tangipahoa Parish Clerk of Court Julian Dufreche. In lieu of flowers the family has requested that donations be made to the Southeast Louisiana Veterans Home at www.la.egov.com/dva/mfadonations to help with medical supplies in honor of Mr. John. Due to the current order by Gov. Edwards, the family is not able to invite the public to a visitation or funeral services as intended. A memorial mass and celebration of life service will be held at a later date.

John Joseph Dufreche died peacefully on Tuesday, March 31, 2020, after an illness with dementia. John was born on November 11, 1959, and was a life-long resident of Ponchatoula. After graduating from Ponchatoula High School, John enlisted... View Obituary & Service Information

The family of John J. Dufreche created this Life Tributes page to make it easy to share your memories.

Send flowers to the Dufreche family.