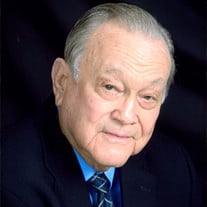 Jimmy Ray Sledge, loving husband, father, father-in-law, grandfather, brother-in-law, uncle, and friend, died peacefully Saturday, September 18, 2021 in Shreveport, Louisiana surrounded by his family. Jim, a resident of Hammond, recently retired as a 40 year agent for Shelter Insurance, was born in Martin, Louisiana, October 24, 1932 to Valery D. and Charles Marklin Sledge. He attended Louisiana State University before joining the Air Force. He married and loved dearly, Patricia Hankins Sledge until her death in 2005. After the Air Force, Jim moved to Hammond, Louisiana in 1958 where he lived until he evacuated to Shreveport after Hurricane Ida. He spent 20 plus years in the poultry business, a job he thoroughly enjoyed, working for Sledge-Townsend, Ralston Purina, and Cal Maine Foods. In 1980, he began selling insurance for MFA, which soon became Shelter Insurance. He especially enjoyed this profession because he was able to meet and help new friends. Jim was very active in the Hammond community and belonged to many civic organizations. He was a proud Rotarian, having been a member in Hammond and Ponchatoula. He received the Paul Harris Fellowship. He was a member of the Chamber of Commerce, board member and president of the school board for Southwood Academy, where he also served as president of the Booster Club. One of his favorite responsibilities there was announcing the football games. He also coordinated and cooked many a bar be que chicken dinner to raise funds. Jim was an avid baseball fan and was delighted to share he had visited all 32 major league baseball parks. Working in his beautiful yard brought him much pleasure, as did feeding and watching the many birds that stayed. He enjoyed roasted peanuts and made the best homemade peach ice cream. Jim was a devoted servant of his Lord, Jesus Christ and tried to live a life of integrity and humbleness. He is preceded in death by his parents and siblings Truett, Dorothy V., C.B., and Yvonne. Jim leaves to cherish his memories his wife, Theresa King, who spent the last 6 years loving him unconditionally, a daughter and son-in-law, Valine and Kirk LaBorde and a son and daughter-in-law, Scott and Melanie Sledge. His grandchildren, who were the light of his life, Maegan LaBorde Brown (Adam), Ann-Marie Sledge, Meredith Leigh LaBorde, Amelia Claire Sledge, Sydney Joffray Richard (Eric), and Scott Campbell “Camp” Sledge; great grandchildren, John Lane Richard and soon to arrive Olivia Kate Richard, sisters-in-law, Pam (David) Brown and Evelyn Sledge, many nieces and nephews that he loved, numerous cousins that will miss him, and Lisa LeBlanc, his secretary for 25 years and dear friend. Relatives and friends of the family are invited to attend a visitation from the chapel of Brandon G. Thompson Funeral Home, 12012 Hwy 190 West, Hammond, LA. on Wednesday, September 22, 2021 from 6:00 p.m. until 9:00 p.m. Visitation will resume Thursday at 10:00 a.m. until the start of the Funeral Service at 11:00 a.m. Interment will follow in Greenlawn Cemetery in Hammond. The family would like to thank Dr. Daniel Johnson, Dr. Stephen Bardot, Dr. Edward Sledge, Dr. Syed Rab, and Dr. Stewart Bundrick Jr. for their care and especially the staff at St. Joseph’s Hospice in Shreveport, who showed such kindness and compassion to the family during his stay. In lieu of flowers, donations may be made to St. Joseph’s Hospice Foundation or the Tangipahoa Parish Library.

The family of Jimmy Ray Sledge created this Life Tributes page to make it easy to share your memories.

Send flowers to the Sledge family.