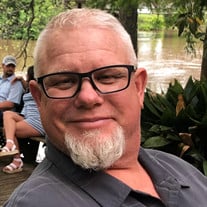 Jarrett was called to his tee time in heaven on Monday, August 16, 2021, at the age of 51. He was born in Hammond, Louisiana where he resided until recently moving to Lafayette, Louisiana following his wife, Loretta’s career (He always said she was his retirement plan). Jarrett proudly became a NPCA Master Precaster after putting in hours of training and taking classes while working alongside Loretta for 7 years. He enjoyed fishing, golfing, bowling, cooking at every family function and being an LSU football enthusiast. During college football season, he would wake up every Saturday morning to watch every big game of the week. Jarrett could also be found reading science fiction novels during his spare time. But, most of all Jarrett enjoyed being with Loretta, their family, their two retired racing greyhounds, Mackie and Jameson, and their bearded dragon Jenga. Jarrett was truly one of a kind and will be deeply missed by all who knew and loved him. He is survived by his loving wife, Loretta George Bodi; sister, Paula Sziber and husband Martin (who he considered his best friends); his brother-in-law, David George and wife Christy; godparents, Dave Bodi (Annette) and Diane Crovetto (Gary); Uncles, Herbert Stansbury (Linda), Johnny Stansbury (Marta), Jerry Stansbury (Susan); aunt, Faye Bodi; father-in-law, Harvey George; nieces, Emily, Kyleigh, Joleigh, Annaleigh, Brynleigh, Whyatt and Destenie along with numerous cousins and other relatives. Jarrett is preceded in death by his parents, Paul Julius and Sandra Stansbury Bodi; paternal grandparents, Julius John Bodi and Louise Beregi Bodi; maternal grandparents, Eneal John Sr. and Winnie Mae Stansbury. In lieu of flowers, the family has asked to please make donations to the Jarrett Bodi Memorial Fund at thbbf.org. Relatives and friends are invited to attend the visitation held in the chapel of Brandon G. Thompson Funeral Home, 12012 Hwy 190 West in Hammond, on Friday, August 20, 2021, beginning at 11:00 a.m. until the funeral service at 1:00 p.m. The interment will follow at The Hungarian Presbyterian Church Cemetery in Albany, Louisiana.

Jarrett was called to his tee time in heaven on Monday, August 16, 2021, at the age of 51. He was born in Hammond, Louisiana where he resided until recently moving to Lafayette, Louisiana following his wife, Loretta&#8217;s career (He always... View Obituary & Service Information

The family of Jarrett Paul Bodi created this Life Tributes page to make it easy to share your memories.

Jarrett was called to his tee time in heaven on Monday, August...

Send flowers to the Bodi family.