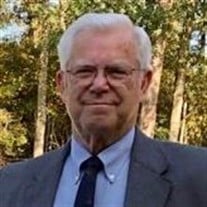 James Roland Weatherford passed away on Saturday evening, September 11th, 2021 at Ochsner Medical Center in Baton Rouge. He was 75. On the afternoon of Aug. 28, James suffered sudden cardiac arrest upon learning that his eldest son, Wade, had just been killed in a motorcycle accident. James was a graduate of Walker High School (1964) and Southeastern Louisiana University (Jan. 1970) and a veteran of the Army Reserves. He made a living as a masonry contractor and was known in the profession for his artistic and perfectionist approach to the job. He was also a talented musician, known by many for his guitar playing and beautiful singing voice. James had many other talents and hobbies, such as cooking, gardening, building and repairing anything and everything, and more. One of the pastimes that he enjoyed most was traveling with his wife and family in their motorhome and spending time with special people met along the way, many of whom would become close, lifelong friends. James was an extraordinary man, but above all, he was a man of faith and of strong convictions, and he used his talents and strengths to help others whenever he could. James was born in Lecompte, LA on August 31, 1946 to Roland G. Weatherford, Jr. and Marie Simmons Weatherford. He was a longtime resident of Denham Springs, LA. James is survived by his loving and devoted wife of 55 years, Linda Fay Burch Weatherford; daughter and son-in-law, Jamie Weatherford and Gary White; son, John Weatherford; daughter-in-law, Jo Ann Roe Weatherford (wife of Wade); brother, David Weatherford; sister and brother-in-law, Charlene and Larry Cunningham; mother-in-law, Frances Brown Burch; grandchildren, Blayke Weatherford, Brook and husband Chris Mixon, and Dalton Weatherford and fiancée Kaylea Pendarvis; great-grandchildren, Colton Weatherford and Henleigh Mixon; honorary family members, Norman “Buck” and Mitzi Grantham; and numerous nieces, nephews, and other beloved family members and friends. James was preceded in death by his parents, Rev. Roland “JR” Weatherford, Jr. and Marie Simmons Weatherford; son, James “Wade” Weatherford (d. Aug. 28, 2021); brother-in-law, John Carl Burch, Jr.; and father-in-law, John C. Burch, Sr. Services for James will be held on Friday, September 17. Visitation will be held from 11:00 AM to 1:00 PM at Brandon G. Thompson Funeral Home in Denham Springs, with a service at 1:00 PM conducted by Bro. Charles Ray Smith. A brief graveside service will follow at Judson Baptist Church in Walker. The family offers heartfelt thanks to the doctors and nurses whom so compassionately cared for James in the ICU at Ochsner Medical Center. The funeral service will be zoomed. Please click the link and enter the password, Thompson, to watch the service. https://us06web.zoom.us/j/7381685135?pwd=Y09KbzhqZE5oQS9xZklUTWRQaGcyZz09

James Roland Weatherford passed away on Saturday evening, September 11th, 2021 at Ochsner Medical Center in Baton Rouge. He was 75. On the afternoon of Aug. 28, James suffered sudden cardiac arrest upon learning that his eldest son, Wade, had... View Obituary & Service Information

The family of James Roland Weatherford created this Life Tributes page to make it easy to share your memories.

Send flowers to the Weatherford family.