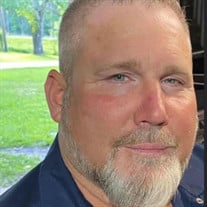 James “Wade” Weatherford On Saturday afternoon August 28, 2021, Wade Weatherford, age 50, was fatally injured in a motorcycle incident on Hwy. 190 in Livingston, Louisiana in front of his home. Wade was born on September 23,1970 to his parents James Roland Weatherford and Linda Burch Weatherford. At the time of the incident, Wade was residing in Livingston at the same home site where Wade lived at the time of his birth. Wade, above all, was a loving Son, Husband to Jo Ann Roe Weatherford, Father to Dalton Weatherford and fiancée Kaylea Pendarvis and Brook Weatherford Mixon and husband Chris and the proud Grandfather of Colton Weatherford and Henleigh Mixon. He was a brother to Jamie Weatherford and husband Gary White and John Weatherford. Wade was loved by several nieces, nephews, uncles, and aunts. Wade’s favorite day was of the week was Sunday when his children and grandchildren came to his home for Sunday dinners. He loved spoiling his grandchildren and posted pictures multiple times per day of him and the babies. Wade always had a dog or two and tried raising chickens but somehow ended up with mostly roosters. Wade had a certain passion for motorcycles. His skills as a Welder and Mechanic and his vision lead him to repairing, building, and riding motorcycles. His favorite bikes were Harley Davidsons, and he had a special place for his 1972 Shovel Head. His wife Jo Ann rode with him on many occasions along with his motorcyclist friends. He was particularly proud when after 23 years, he and his son Dalton were able to ride together. If you knew Wade, you knew his personality and humor and he was one to love. He never met a stranger and was immediately friends with everyone. Wade is survived by his Maternal Grandmother Frances Brown Burch and by numerous nephews and nieces. Preceding him in death were his Paternal Grandfather JR Weatherford and Grandmother Marie Simmons Weatherford as well as his Maternal Grandfather John C. Burch Sr. Pallbearers: Tony Young, Lyle Adkins, Jimmy Anderson, Reed Loftis, Chris Mcbay, Mike Bourgeois, and Joe Roberts.

The family of James Wade Weatherford created this Life Tributes page to make it easy to share your memories.

Send flowers to the Weatherford family.