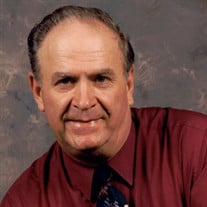 James "Jim" Edward Coleman, age 85, went to his Heavenly Home on Wednesday, July 8, 2020 surrounded by his family. He was a native of Bristow, OK and a resident of Holden, LA. He proudly served his country in the United States Army National Guard. Jim was an extremely hard worker who dedicated many years as a welder and was a member of the Local 198 Welder's Union. Jim was a jack of all trades who could fix anything from mangled glasses to tractors; nothing was beyond repair. All of his grandkids knew as soon as something was broken, Paw Paw could fix it. Above all he was a faithful man of God. You could hear him praying from his home at all times, day and night. His quiet strength was unlike any other. Jim loved his family, friends, and God. The legacy he leaves behind is that of faith, trust, and hope in a power greater than any other. Jim is survived by his loving wife, Norma Jean Coleman; daughters, Shannon Coleman Davidson (Jimmy Ray Davison Jr.), Deborah Coleman Clardy (Floyd Clardy); son, James "Eddie" Edward Smith; grandchildren, Logan Ray Davidson, Lauren Ashley Jones, Brice Clayton Clardy, John Smith, Erin Smith; nephew, Ray Smith; and numerous other nieces and nephews. He is preceded in death by his parents, Henry Homer Coleman and Thelma Floy Coleman; brothers, Robert Coleman, Brice Clayton Coleman, RD Coleman; and sisters, Alma Smith and Eulema Soloman. Relatives and friends are invited to attend the visitation at the Albany United Pentecostal Church from 9:00 a.m. until the funeral service at 11:00 a.m. Rev. Tommy Russell, Rev. Leslie Courtney Jr., and Rev. Ken Hickman will officiate and interment will follow in Courtney Cemetery. Condolences and other information are available online at thompsoncares.com. Arrangements have been entrusted to Brandon G. Thompson Funeral Home.

James "Jim" Edward Coleman, age 85, went to his Heavenly Home on Wednesday, July 8, 2020 surrounded by his family. He was a native of Bristow, OK and a resident of Holden, LA. He proudly served his country in the United States Army National... View Obituary & Service Information

The family of James Edward Coleman created this Life Tributes page to make it easy to share your memories.

Send flowers to the Coleman family.