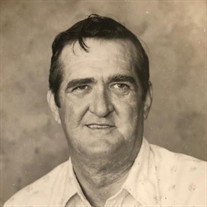 After a lifetime of traveling the world and living life to the fullest, Jack was called to his final destination on September 29, 2020, while surrounded by his family at home. He was 84 years old and made his life in Springfield (“God’s Country”), a place he loved. You could always find him at the boat launch on Highway 22 every day at 11:00, so it was very fitting when he was actually captured on a GoogleEarth photo while there! He never met a stranger and loved to tell a good story. If you ever visited him in his home, you were treated to a fresh cup of coffee or a strong drink (your choice!) and some good stories. He developed a love of airplanes and flying during his years of service in the U.S. Marine Corps and made his first solo flight on “April Fool’s Day” of 1955 while stationed in Pearl Harbor, Hawaii. His family spent many weekends at the Hammond Regional Airport being taken on airplane rides and being taught how to fly whatever plane he owned at the time. He loved his grandchildren and imparted upon them lots of worldly knowledge… such as “how to tell if your airplane is upside down”…and that “you must avoid developing a condition called “optical rectitis”! Jack is survived by his devoted wife of 56 years, Linda Raiford Lloyd; his two daughters: Tammy Hinds (Rocky) and Samantha Lloyd (Joseph Ribando, III); his grandchildren: Bridget Rivet (Tyler), Ricky Jace Albin (Lindsey Connelley), Randy Jared Albin (Halie Domiano), and Artist Albin. He is also survived by his much adored great grandchildren: Wade, Norah and Reece Albin, and Gage Rivet. Jack was preceded in death by his parents, Lessean “Bud” Lloyd and Caroline “Carrie” Laird Lloyd, and two brothers, Lessean Mark Lloyd (Springfield, Louisiana) and Roy Harold “Buddy” Lloyd (Jacksonville, Florida). Relatives and friends are invited to attend the Visitation at Brandon G. Thompson Funeral Home, 1190 Highway 51 North, Ponchatoula, LA on Saturday, October 3, 2020 from 10AM until NOON. The Funeral Service will follow in the funeral home chapel at NOON. Interment, Carter Cemetery, Springfield, LA. Condolences may be offered at www.thompsoncares.com

After a lifetime of traveling the world and living life to the fullest, Jack was called to his final destination on September 29, 2020, while surrounded by his family at home. He was 84 years old and made his life in Springfield (&#8220;God&#8217;s... View Obituary & Service Information

The family of Jackie Raymond Lloyd created this Life Tributes page to make it easy to share your memories.

After a lifetime of traveling the world and living life to the...

Send flowers to the Lloyd family.