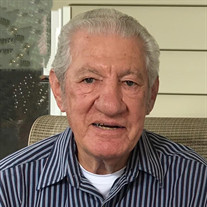 Homer Joseph Gaspard, 86, passed away peacefully on Monday, June 15th 2020 in Albany, Louisiana. Homer spent his younger years in Bayou Jack, where he worked his family farm and graduated Plaucheville High School in 1952. Immediately following graduation, Homer was drafted into the United States Army where he diligently served his country with pride, honor, and integrity. This was one of Homer's proudest accomplishments. Homer married Bernice, who he lovingly referred to as "Too", in the Immaculate Conception Church in Dupont, Louisiana on July 4th, 1955. Homer worked in the grocery business for the majority of his adult life in both Orleans and St. Bernard Parishes. Following Hurricane Katrina, Homer and his wife, Bernice, retired to Albany, Louisiana to be surrounded by their children. It was here that he spent countless afternoons sitting on his back porch enjoying an ice cold beer with his family. Homer had the amazing ability to make so many feel as though they were a part of his family from the moment that he met them, and nothing was more important to Homer than his family. Homer is survived by his loving wife of 65 years, Bernice; his sister Elaine Maher, his brother Julius (Joyce), his 2 sons Mark (Judy) and Alden (Nancy); 2 daughters, Dawn (David) and Dion (Shawn); his 4 Grandchildren Myndi (Shad), Brook (Joel), Casey (Danny), and Kyle (Danielle); his 4 beautiful great granddaughters, Anna, Kaylin, Molly, and Mia; 2 step grandchildren, Caleb and Abbey, and the countless others who he adopted in his heart as his children and grandchildren. Homer is preceded in death by his parents, Mary and Lavine, 4 sisters and 1 brother. In lieu of flowers, a donation to St. Margaret's Church, or your local church would be greatly appreciated. Relatives and friends are invited to attend the visitation at St. Margaret Catholic Church Fellowship Hall in Friday, June 19, 2020 beginning at 9:00am until 11:30am. A Funeral Mass officiated by Father Jamin will follow and take place at St. Margaret Catholic Church starting at 12:00pm. Burial to follow in the church cemetery.

The family of Homer Joseph Gaspard created this Life Tributes page to make it easy to share your memories.

Send flowers to the Gaspard family.