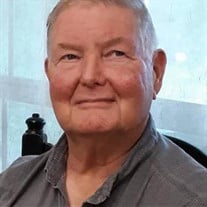 Henry Lawrence Porter III, 69, of Walker, Louisiana left this life and went to his eternal home on Wednesday, March 31, 2021, at Our Lady of the Lake Regional Medical Center in Baton Rouge, Louisiana. Mr. Porter grew up in Gretna, Louisiana, the son of Henry Lawrence Porter II and Elsie McGuffee Porter. He was a graduate of West Jefferson High School and Louisiana University in Monroe where he majored in history. History remained an interest throughout his life. He had a particular interest in World War II history, as his dad had been in the first Marine Division, Pacific theater. Early in his career he was a welder at Avondale Shipyards and also worked as a welder at several different oil refineries in the New Orleans area. Mr. Porter furthered his education, became certified as an instrumentation electrician, and pursued that career for many years. He retired from ISC Contractors, after 15 years of employment there. A lifelong Christian and Bible scholar, Mr. Porter was a member of Hebron Baptist Church at the time of his death. He was a regular churchgoer, at times teaching Sunday Schools or Bible Studies. He was committed to daily prayers and devotionals. Survivors include his wife of 39 years, Pamala Lorio Porter. He was the father of two daughters Heather (Dustin Rodrigue) and Claire (Wesley Lacy) and proud grandfather of four grandchildren, Zoe Rodrigue, Zac Rodrigue, August Lacy, and Daphne Lacy. Two sisters, two nieces, two nephews, five great nieces, two great nephews, and many cousins also survive him. John 1:12 But as many as received Him, to them gave he power to become the sons of God, even to them that believe on His Name: John 3:16 For God so loved the world, that He gave His only begotten Son, that whosoever believeth in Him should not perish, but have everlasting life.

Henry Lawrence Porter III, 69, of Walker, Louisiana left this life and went to his eternal home on Wednesday, March 31, 2021, at Our Lady of the Lake Regional Medical Center in Baton Rouge, Louisiana. Mr. Porter grew up in Gretna, Louisiana,... View Obituary & Service Information

The family of Henry Lawrence Porter III created this Life Tributes page to make it easy to share your memories.

Send flowers to the Porter family.