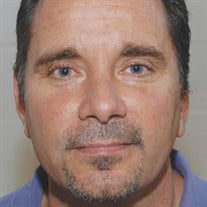 Guy Arthur McDonald, a lifelong resident of Livingston and forever Doyle Tiger, died Sept. 3, 2021, at the age of 56, after a lengthy battle with COVID. He was surrounded by his loving family and caring medical staff at Our Lady of the Lake Medical Center. Guy is survived by his wife, Linda Lea Sibley McDonald, the love of his life since seventh grade; their two daughters and families, Jennifer McDonald Taylor, husband Phillip, children Lena and Lucas; and Kerri McDonald Coxe, husband Bradley, children Keaton Arthur and Clarke; mother-in-law Bonnie Sartwell Sibley; brother-in-law Joey Sibley, wife Donna; and sister-in-law Julie Albin, friend Lonnie Watts. He is preceded in death by his parents Jerry and Ann McDonald; father-in-law Howard “Red” Sibley and sister-in-law Alice Sibley; and fur babies King, Suzy and Lilann. Guy taught history for nearly 30 years at Doyle High School, and he coached girls’ basketball, baseball, track, and golf for more than 25 years. He served as athletic director from 2016 until his retirement in March 2021. He led both the baseball and girls’ basketball teams to the playoffs each year that he coached. The baseball team finished as the state runner-up in 2001, and the girls’ basketball team made back-to-back quarterfinal appearances in 2012 and 2013 and reached the state championship game in 2014. He was named the Louisiana High School Coaches Association’s “Coach of the Year” in 2014. When Guy wasn’t at a school activity, he could be found golfing with friends, traveling with family, at home with grandchildren, or in the yard with fur babies, Pepper and Domino. He was a graduate of Southeastern Louisiana University and Doyle High School. He was a member of First United Methodist Church in Livingston. A memorial celebration honoring his life will be held at 2 p.m. Saturday, Sept. 11, 2021, at Brandon G. Thompson Funeral Home in Denham Springs. Visitation with the family will be held that day from 10 a.m. to 2 p.m. The service will be led by his childhood friend and classmate, Jeff Taylor, and Pastor Rick Wright. Interment will take place immediately following the ceremony at the Sibley Cemetery in Walker. In lieu of sending flowers, the family asks that donations be made to the Guy McDonald “It Takes Everyone” Fund. The fund will be an annual award to advance the educational or career pursuits of Doyle High School graduates. Donations can be sent to P.O. Box 963, Livingston, La. 70754. #OnceATigerAlwaysATiger

Guy Arthur McDonald, a lifelong resident of Livingston and forever Doyle Tiger, died Sept. 3, 2021, at the age of 56, after a lengthy battle with COVID. He was surrounded by his loving family and caring medical staff at Our Lady of the Lake... View Obituary & Service Information

The family of Guy McDonald created this Life Tributes page to make it easy to share your memories.

Guy Arthur McDonald, a lifelong resident of Livingston and forever...

Send flowers to the McDonald family.