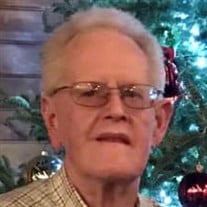 Glen Hilton Thompson, a loving husband, father and grandfather, passed away peacefully on Thursday January 14, 2021 at his home. He was a lifelong resident of Pumpkin Center Louisiana, a member of Trinity Baptist Church, and a veteran of the United States Army Reserve. He was not a man of many words but the life Glen led spoke volumes. He was humble and a true southern gentleman. As a well-respected home builder in the community, Glen was known for his honesty, integrity, and experience. He had a strong work ethic and passed these values, along with his knowledge of carpentry and construction, down to his sons. Anytime there was a project going on, you could always count on Glen to help, without being asked. In his younger days, he enjoyed fishing, especially on the Natalbany River. In his older years, you could often find him cutting grass, piddling on his rental properties, or maybe even watching Westerns in his recliner. For certain, you could find him enjoying a cup of coffee on his porch first thing in the morning and precisely at 2:00 pm every day. He is survived by his beloved wife of 54 years, Annie Marie Hutchinson Thompson; sons, Brandon Glen Thompson and wife Martha, and Lance Alan Thompson; daughter-in-law, Lindsay Hagan Thompson; grandchildren, Lauren Thompson Gaudin and husband Derek, Madison Thompson, Emily “Tori” Thompson, Brandon Thompson Jr., Molly June Thompson, Sarah Beth Thompson, and Hagan Thompson; great-grandchildren, Adeline and Annie Gaudin. Preceding Glen in death were his parents, Wildon and Beatrice Thompson; daughter, Dana Thompson; grandson, Hunter Thompson; siblings, Kenneth “Kenny” Thompson, and Argie Thompson Stewart; father-in-law, Cecil Elliot “Deloy” Hutchinson; mother-in-law, Francis Glascock Hutchinson. Relatives and friends of the family are invited to attend the funeral service from the chapel of Brandon G. Thompson Funeral Home in Hammond, 12012 Highway 190 West Hammond LA 70401, on Monday, January 18, 2021 at 12:00 pm, with the visitation beginning at 9:00 am. The service will be conducted by Pastor Jeremy Glascock and interment will follow in Jerusalem Baptist Church Cemetery. Following the graveside service, guests are invited to return to the funeral home for a catered reception.

Glen Hilton Thompson, a loving husband, father and grandfather, passed away peacefully on Thursday January 14, 2021 at his home. He was a lifelong resident of Pumpkin Center Louisiana, a member of Trinity Baptist Church, and a veteran of the... View Obituary & Service Information

The family of Glen Hilton Thompson created this Life Tributes page to make it easy to share your memories.

Send flowers to the Thompson family.