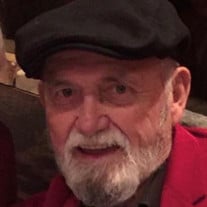 Gerald Rayford Stewart Gerald our beloved husband, father, grandfather, brother, uncle and friend, went home to be with Our Lord and Savior Jesus Christ on Wednesday, February 5, 2020. Gerald was born January 23, 1942 and was a lifelong resident of Holden, Louisiana. He loved his family passionately, lived his life selflessly, and was always in the service of others and the Lord. Gerald’s character reflected his love of life and people. Gerald and his brother Tincy had a special bond throughout their entire life as they worked every job together. Additionally, Annette his sister was special to him as he made nearly daily visits to spend time with her. These relationships are just a snapshot of the love that he had for his family and friends. Gerald had an impact on those who met him, and he will be missed by all that know him. Gerald proudly served his country in the U.S. Army and worked as a Millwright throughout his career. Those left to cherish his memory include his beloved wife, Patricia Jones Stewart; his daughter Shelley Stewart Johnson (Paul Johnson), sons Jared Blake Stewart (Kacie Duplessis) and Skipper Kelly Stewart (Connie DeLaune); grandchildren Dallas Brett Stewart, Bailee Lorraine Stewart, Shelby Kate Johnson, Landry Kate Johnson, Cru Levi Stewart, Cohen Paul Jonson, Cash William Stewart; sisters Judy Jones Borries, Ethel “Dude” Stewart Worthy, Annette Duffy Courtney; a brother, Carol “Tincy” Stewart; and numerous beloved nieces and nephews, other family and friends. He was preceded in death by his parents, Etta Stewart and Isaac “Ike” Stewart, and siblings Jerry Stewart, Jessie Morris “Sonny” Jones and Cecil Jones. Relatives and friends are invited to attend the Visitation at Bethel Baptist Church, 20419 Circle Dr., Livingston, LA on Saturday, February 8, 2020 from 10AM until 2PM. The Funeral Service will begin at 2PM. Interment will follow at Red Oak Cemetery, Livingston, LA. Condolences may be offered at www.thompsoncares.com

Gerald Rayford Stewart Gerald our beloved husband, father, grandfather, brother, uncle and friend, went home to be with Our Lord and Savior Jesus Christ on Wednesday, February 5, 2020. Gerald was born January 23, 1942 and was a lifelong resident... View Obituary & Service Information

The family of Gerald Rayford Stewart created this Life Tributes page to make it easy to share your memories.

Send flowers to the Stewart family.