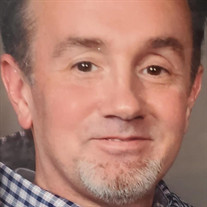 Fred William Goodspeed, Jr., age 53, a resident of Baton Rouge, Louisiana, passed away peacefully at his home the morning of Tuesday, August 3, after a brief illness. Brandon Thompson Funeral Home in Hammond, Louisiana, is in charge of arrangements. Visitation is this Sunday, August 8 th , 2021 from 9 a.m.--11 a.m. Funeral will immediately follow, from 11 a.m.--11:30 a.m., presided by Reverend Julius Tipton of First Christian Church in Baton Rouge, where Fred was a long-time member and Deacon. Pall bearers are Gage Goodspeed, David Landry, Brad Bradburn, Aaron Turner, Chad Soileau, David Dionne, Cody Carmena and Dustin Taylor. Honorary pall bearer is Collin Landry. Graveside services will be immediately after the funeral, at Carter Cemetery in Springfield, Louisiana. Fred was a 1987 graduate of Woodlawn High School, and a graduate of Southeastern Louisiana University in 1992, where he obtained a Bachelor of Arts in Communications. While at Southeastern, he was a member of Kappa Sigma Fraternity, serving as Vice-President, Secretary, Historian and Community Service Chairman (AEKDB!). Fred was a veteran, having served in the Army/National Guard for 6 years, where he was awarded the Certificate of Outstanding Achievement as well as the Humanitarian Award for Voluntary Service to Community. Fred was employed by Simple Fusion, in computer networking as a Tier 1 Support Specialist. Prior to that, Fred was employed with Vartech and I-55/PixelStix in graphic design and marketing. One of Fred’s favorite projects was a 200-page website for the D-Day Museum in New Orleans, in which the actor, Tom Hanks, promoted and approved the initial concept, content and design. Fred was a highly creative soul and master bladesmith, who crafted knives in his workshop forge and made tactical and self-protection gear with his son, Gage. Fred had written a comic book, “Optica,” as well as a sci-fi newsletter, “In Orbit” in the 90s. While Fred was in college, he loved acting and theater, and in 2010, he was cast as a supporting actor in the award-winning short horror film “The Final Textination” - which, in his words, “was a fun experience that taught me a lot about the film industry.” Fred made his appearance as the neighbor, “Mr. Smith” at 18:35 into the short film. Fred loved sci-fi and action movies, but horror movies, particularly the zombie genre, were his favorite. He loved the juxtaposition of kindness and vulnerability versus survival instinct. As the Reverend Laura Ann Phillips recently posted in her Facebook tribute, Fred got her to start watching this genre, because “the monster is never the issue – it’s about how humanity treats each other in the face of the monster.” No truer words can be said, as we all are still facing this pandemic, which has been the catalyst for our grief in Fred’s passing. Fred is survived by his loving father, Fred William Goodspeed, Sr., of Springfield, LA, his mother and stepfather, Dianne Turner, and Roy Turner, Jr. , of Austin, TX; sister, Elizabeth Del Papa Bradburn and her husband Brad Bradburn, of Austin, TX; brother, Aaron Jacob Turner and his wife, Ruth Turner of Austin, TX; sister, Lisa Smart Carmena and her husband, Frank Carmena, of Baton Rouge, Louisiana. Fred was an amazing, loving father and is survived by Gage William Goodspeed, his son, who was his ultimate achievement and greatest source of pride and joy. He was a loving godfather/”Papi Said” to Collin David Landry, faithfully keeping 2-hour play dates nearly every week for the past ten years, having nerf gun battles and running all over the house; he was the beloved ex-husband of Ann Landry, and was the best of friends with both Ann and her husband, Duane David Landry, who jokingly referred to one another as “husband-in law” because they were such close friends. Fred is also survived by his nephews, Luke and Ezra Bradburn, and Cody Carmena, as well as Cody’s wife, Alex Dickerson Carmena, and their two children, Harrison and Elliot Carmena; his niece, Helena Bradburn, and his beloved dog, Drake, who is now living with The Landry family. Fred is survived by many beloved friends and co-workers, but special mention and gratitude is extended to Cherie Taylor, Chad Soileau, Shelley Leigh Viar, Norelle Florentino, and Fred’s neighbor, Mr. Howard. Fred was preceded in death but welcomed with joyful, open arms to heavenly peace and joy by his loving paternal grandparents, Stella Goodspeed and Bill Goodspeed; maternal grandparents, Vera Johnson and Willie Johnson; step-paternal grandparents Ruth Turner and Roy Turner, Sr.; his beautiful sister, Rebekah Danielle Turner; and his beloved nephew, John Nathan Carmena, as well as friends Charlie Taylor and Michele Thornsberry (Nadaf-Rahrov), Sandy Smith and George Rockwell. For anyone who wishes to do so, flowers may be sent to the funeral home, or if preferred, a donation may be made to the Denham Springs (No-Kill) Animal Shelter in Fred’s honor.

Fred William Goodspeed, Jr., age 53, a resident of Baton Rouge, Louisiana, passed away peacefully at his home the morning of Tuesday, August 3, after a brief illness. Brandon Thompson Funeral Home in Hammond, Louisiana, is in charge of arrangements.... View Obituary & Service Information

The family of Fred William Goodspeed Jr. created this Life Tributes page to make it easy to share your memories.

Send flowers to the Goodspeed family.