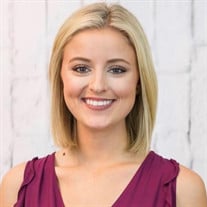 Emily Claire King Lewis age 27, of Loranger passed away peacefully at her residence on Wednesday, January 5, 2022, following a courageous battle with cancer. She was born on July 16, 1994 in Covington, Louisiana to Eric King and Rose Anne McDow. She was the youngest of three children, including her living siblings Eric King (Holly) and Daniel King (Andrea). Emily is survived by the love of her life and husband Brad Lewis, whom she married on December 27, 2019. Emily is also survived by her father-in-law Welton Lewis, mother-in-law Debbie Lewis, sister-in-law Whitney Lewis, her niece (and best friend) Erica King, her nephews Wyatt King, Kaden King, Waylen King, and expected twins. She is preceded in death by her paternal grandparents James Wallace King (Lois, living) and Eula Mae Clairain and maternal grandparents Dennis Wayne and Dorothy Mae McDow. Emily graduated from Saint Scholastica Academy in 2012, where she spent her time as part of the Royalettes and Golden Blues dance teams. She was also a graduate of Southeastern Louisiana University in 2017, where she earned a degree in Speech Pathology and served as Vice President of the Phi Mu - Alpha Psi Chapter. She later pursued her passion for interior decorating as the marketing manager and merchandiser for Clayton House Marketplace, and in her involvement with other businesses local to her hometown. She also expressed her talents in her own home décor business, The Budding Botanist, that she co-owned with Erica King. Outside of her profession, Emily valued her time spent with loved ones and caring for her dog Samson. Even throughout her treatment, she always wore a smile and a positive attitude. Her constant demonstration of generosity, perseverance, and warmth remains an inspiration for anyone who met her. She is loved dearly and will be greatly missed by her friends and family. Visitation will be held on January 10, 2022 from 10:00 a.m. - 12:00 pm at Brandon Thompson Funeral Home, 12012 Highway 190 West, Hammond Louisiana 70401. Interment to follow at Narretto Cemetery. The family invites you to share thoughts, fond memories, and condolences online at Brandon G. Thompson Funeral Home Guest Book at www.thompsoncares.com.

Emily Claire King Lewis age 27, of Loranger passed away peacefully at her residence on Wednesday, January 5, 2022, following a courageous battle with cancer. She was born on July 16, 1994 in Covington, Louisiana to Eric King and Rose Anne McDow.... View Obituary & Service Information

The family of Emily Claire Lewis created this Life Tributes page to make it easy to share your memories.

Send flowers to the Lewis family.