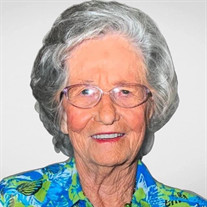 Emily Jeanette Thompson Brown, age 93 of Ponchatoula, LA, passed away on Saturday, December 25, 2021, with her devoted family by her side. Jeanette was born on July 1, 1928 near Montpelier, LA to Henry and Minnie Wascom Thompson. She owned... View Obituary & Service Information

The family of Emily Jeanette Thompson Brown created this Life Tributes page to make it easy to share your memories.

Send flowers to the Brown family.