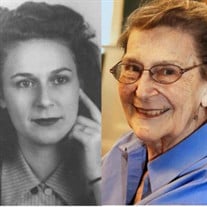 Elois Hoover Effler, 93, passed from this life into the presence of the Lord on October 13, 2021, at Landmark Nursing Center of Hammond. She was born in Ponchatoula, La., lived in Pumpkin Center until age 6, and then moved to Jackson, La. There she attended school and graduated from McKowen High School. After graduation she lived in Baton Rouge where she attended business school and worked until she married Thomas B. Effler in 1947. They settled in Pumpkin Center, where they raised their three children together and proudly watched their family expand with the births of grandchildren and great-grandchildren. She was a retired first grade teacher of 25 years who held a master’s degree +30 hours in education from Southeastern Louisiana University. Her gift for teaching was evident at home as she taught her children and grandchildren how to bake and cook many of the foods for which she was locally known, including her red velvet cake and her biscuits. She often opened her home to friends and family where she was an attentive hostess, and no one left her kitchen without at least a cup of coffee. She loved the Lord above all else and lived out her faith by loving her neighbors selflessly and with all her heart. Mrs. Effler was a longtime member of Jerusalem Baptist Church and faithfully served as a Sunday School teacher and member of the WMU. She had a generous spirit and would often bring meals to those who were ill or bereaved, and she also participated in the church prayer chain and served with the youth when she was first married. She was a member of the Nova Stella Chapter #36 Order of Eastern Star for over 50 years and was a past Worthy Matron. She was also a member of the Auxiliary of the Gideons International and served as president for three years. She had many hobbies and skills, and she excelled at all of them. She was a talented painter as evidenced by the many canvases displayed in her home and the homes of her family. She was an excellent seamstress and could always be counted on to make a prom dress or alter any garment; she was able to see a dress in the window of a store and duplicate it without a pattern. She loved to grow flowers, and her yard and back porch were always filled with blooms and healthy plants. All of these accomplishments and gifts cannot fully complete the picture of who she was, because she was something different to everyone. She was a loving wife, an encouraging mother, a devoted daughter, a loyal sister, an involved grandmother, a doting great-grandmother, and a friend that could always be counted on to be there. She leaves behind family and friends who loved her just as fiercely as she loved them, and that is her real legacy. Left to celebrate her life are her daughter Gail Effler Braymer and son-in-law Hugh Douglas Braymer of Baton Rouge, son, Charles E. Effler of Hammond, and son-in-law Ronald D. Traylor of Hammond; two brothers, Carl Hoover and Lloyd Hoover. She is also survived by her eight grandchildren and fourteen great-grandchildren, and numerous nieces and nephews. She was preceded in death by her husband of 59 years, Thomas Battice Effler, her daughter, Gwendolyn Effler Traylor, her father, Duson E. Hoover, Sr., her mother, Ludie Meades Hoover, two brothers, Duson E. Hoover, Jr. and John L. Hoover, and two sisters, Ethel Harrow and Odette Sallinger. The family of Mrs. Effler would like to express their gratitude to all the friends who visited, sent cards, and prayed for her. They would also like to thank the staff of Landmark Nursing Center for the loving and compassionate care they provided for her over the last several years, as well as Lifesource Hospice. Visitation will be held at Jerusalem Baptist Church in Pumpkin Center on Monday, October 18, from 9:30 a.m. until the service to celebrate her life at 11:00 a.m. Burial will follow at the church cemetery. Masks are strongly encouraged. In lieu of flowers, donations can be made to Gideons International 615-564-5000 or the charity of your choice.

Elois Hoover Effler, 93, passed from this life into the presence of the Lord on October 13, 2021, at Landmark Nursing Center of Hammond. She was born in Ponchatoula, La., lived in Pumpkin Center until age 6, and then moved to Jackson, La. There... View Obituary & Service Information

The family of Elois Hoover Effler created this Life Tributes page to make it easy to share your memories.

Elois Hoover Effler, 93, passed from this life into the presence...

Send flowers to the Effler family.