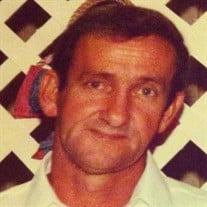 Donald was called to his heavenly home on Friday, February 25, 2022, at the age of 68. He was born in Hazelhurst, Mississippi and resided in Walker, Louisiana. Donald was a one-of-a-kind man who had a hard exterior, with every scrape, bump, and scratch on his body telling a story of endless hard labor from working on Mopar vehicles to working in his shop to working in his garden. Fishing and hunting were some of Donald’s other favorite pastimes but spending time with his grandchildren and great-grandchildren brought the most joy to him. He was tough as nails and was intimidating to say the least. He welcomed any man into his home with a shotgun in hand, and you never dared to cross him nor disrespect his family. You knew what you got with Donald, nothing was ever hidden, and he spoke his mind without any hesitation of holding back a curse word or two. To say he was the glue and leader of his family is an understatement. Donald protected his entire family with every ounce of his soul. Secretly, though, he was a softy who loved his friends and family dearly. He would do anything for anyone even at a short time’s notice, no matter how challenging the task was at hand. Donald was a loving husband, father, and Poppa that will truly be missed by all who knew and loved him He is survived by his loving wife, Frances Kelly; daughters, Tiffany Sibley (Darron “Toot”), Tisha Theunissen (Chad), and Donna Kelly (Kody Mills); brother, Danny Kelly; grandchildren, Elisa and Abbie Sibley, Ethan Theunissen, Blaith, Anna, and Cooper Mills; great-grandchild, Aurora “Lucy” Sibley; numerous sisters-in-law and brothers-in-law, nieces, and nephews; lifelong friends, Dennis James, Ronnie Hull Sr., Johnny “Chopper” Jeansonne, and Kelly Dugas. Donald is preceded in death by his father, J.D. Kelly; his mother, Lucile Kelly; brothers, David Kelly Jr., and Ronald Kelly; father-in-law, Jake Street; mother-in-law, Lillian Street. In lieu of flowers, please make donations to the family’s horse rescue, “Greeno Equine Sanctuary.” Relatives and friends of the family are invited to attend the visitation held in the chapel of Brandon G. Thompson Funeral Home, 7738 Florida Blvd. Denham Springs, LA, on Tuesday, March 1, 2022, beginning at 6:00 p.m. until 9:00 p.m.

Donald was called to his heavenly home on Friday, February 25, 2022, at the age of 68. He was born in Hazelhurst, Mississippi and resided in Walker, Louisiana. Donald was a one-of-a-kind man who had a hard exterior, with every scrape, bump,... View Obituary & Service Information

The family of Donald Jerry Kelly created this Life Tributes page to make it easy to share your memories.

Donald was called to his heavenly home on Friday, February 25,...

Send flowers to the Kelly family.