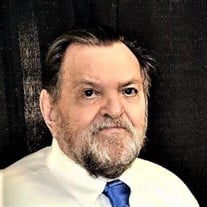 Dickerson J. Falgout, Jr., age 83, passed away on March 6, 2021. He was born in Gheens, LA, attended school in Raceland, LA, and most recently was a resident of Ponchatoula, LA. Dickerson was a veteran who proudly served in the United States... View Obituary & Service Information

The family of Dickerson Joseph Falgout Jr. created this Life Tributes page to make it easy to share your memories.

Send flowers to the Falgout family.