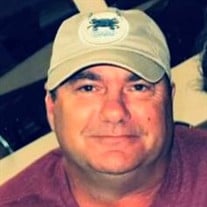 Scoffer, a native and resident of Ponchatoula, was born September 26, 1963 to Lucille Gregoire Davidson and Charles Edward “Daigo” Kraft. Scoffer passed away Wednesday, June 30, 2021 at North Oaks Medical Center at the age of 57, surrounded by family. He was a loving husband, father, son, brother, and friend to many. He was a one of a kind man, to know him was to love him. He is already deeply missed. Scoffer grew up and spent most of his time in Wadesboro and Manchac. He was a homebody and never felt the need to venture off. He loved the outdoors and was the perfect example of living off the land to provide his family with everything they needed. For over 40 years he worked hard by trapping nutria and coon, crabbing, and fishing lines to make a living. He worked daily, he worked hard, and he never believed in resting. He had that lake water running through his veins and absolutely loved his job. He will always be known as one of the best fishermen and crabbers in Manchac. He was as rough and tough as they come and hard to love at times, but he also had the absolute biggest heart of gold. He would help people in any way he could and would never let someone go without. Scoffer also had a love for food and cooking, and he loved to feed his family. He would call his children nightly just to ask what they were cooking and make sure they fed those babies. He really was just a big ole teddy bear especially when it came to his grand-babies. Ten grand-babies later... they were his whole world! He was such a pushover when it came to those babies. They could convince him to do anything and buy them anything as he loved to spoil them rotten. If for some reason he and Pam were alone, he was calling to see when the grandkids were coming back to stay with Paw. They all adored him just the same. Scoffer was so proud of the family he and Pam created, it was his legacy. To him, family was everything and he found the greatest joy and comfort in having the love of his life Pam beside him. His love and admiration for her was evident in his smile and the light in his eyes when he looked at her and the laughter they shared. Although a man who did not wear his emotions on his sleeve, he was proud of his children and their families. He made sure to teach his family to always love and support each other through thick and thin. Scoffer also loved that his son, his son-in-law, and at least one grandson will carry on the tradition and also be great commercial crabbers and fishermen. Scoffer is survived by his beloved wife of 38 years, his most prized possession, Pamela Stanga Kraft; his children, Amanda Kraft Hill-husband Laramie, Charles Jesse Kraft- wife Tamie, and Daisy May Kraft; grandchildren, Skylar Nichols, Dilyn Hill, Ethan Hill, Charleigh Grace Hill, Kalem Smith, Presleigh Kraft, Miah Bernard, Allie May Bernard, Peyton Bernard, and Chandler Hills; his mother and step-father, Lucille Gregoire Davidson and Ken Davidson; mother in law, Jackie Chavers Stanga; sisters, RoxAnn Bear, Renee Kraft-Campbell (Bobby), Jewel Kraft (John), and Lori Kraft (Dave); sister in law, Lynette Stanga. Scoffer is Proceeded in death by his father, Charles Edward “Daigo” Kraft; grandparents John Jacob Kraft Sr., Eva and Billy Ryan, and Bill and Bernice Gregoire; brother-in-law, Mark Bear; father-in-law, Claiborne Stanga; and many uncles and close family friends. PONCHATOULA, LA. Relatives and friends of the family are invited to attend the visitation held in the chapel of Brandon G. Thompson Funeral Home, 1190 Hwy 51 North PONCHATOULA, on Thursday, July 15, 2021 beginning at 5:00 p.m. until 8:00 p.m. Visitation will resume Friday, July 16, 2021 from 9:00 a.m until the start of the funeral service at 11:00 a.m. Interment will immediately follow in Wetmore Cemetery.

The family of Charles Gregory "Scoffer" Kraft created this Life Tributes page to make it easy to share your memories.

Scoffer, a native and resident of Ponchatoula, was born September...

Send flowers to the Kraft family.