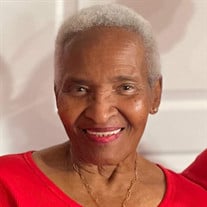 Carrie Givens Jinks, age 85 entered eternal life on March 14, 2022, with her children by her side. She was born on May 8, 1936, to the late Coleman Givens and Elvira Williams in Napoleonville, LA Carrie received her education in Assumption Parish School System. Carrie left Napoleonville, LA and moved to New Orleans, LA where Carrie met the love of her life Gerald Ira Jinks Sr. They married on July 16, 1952. She converted to Catholic Religion and became a member of Saint Monica Catholic Church and Blessed Trinity Catholic Church. Into Carrie’s and Gerald’s union eight children were born - Sandra (Dwight), Cheryl (Roosevelt), Walter (devoted friend Sharon), Deena, Jacqueline, Stephanie (Edward) and Gregory (Shannon). She was proceeded in death by her parents Coleman Givens and Elvira Williams, her husband Gerald Ira Jinks Sr., her son Gerald Ira Jinks Jr., her brother Warren Williams, and granddaughter Trineice Jinks. Carrie leaves behind 22 grandkids, 24 great grandkids, and 4 great-great grandkids and a host of family and friends. Carrie worked at Southern Baptist Hospital for 30 plus years in the Nursery Department where she cared for the doctors and nurses’ children as if they were her own. She also worked in other departments until she retired in 2006. Carrie decided to go back to her roots and became a member of New Hope Missionary Baptist Church under the direction of Pastor John Raphael Jr. Carrie loved spending time with her family and friends. She never missed an opportunity to attend family functions, such as graduations, birthdays, picnics, and weddings. She loved to fish, watch her favorite Western movies and she didn’t miss an opportunity to dance. In addition to spending time with family she loved to bake birthday cakes. Her motto was “Always Keep Moving” and her favorite saying was “Trust in God”. Celebration of life will be held at: New Hope Baptist Church 1807 Rev. John Raphael Jr. Way (formerly LaSalle Street) New Orleans, LA 70113 on Friday March 25, 2022, at 10:00 am. Visitation will begin at 9:00am until the start of service at 10:00am. Reverend Jamaal Weatherby officiating. Final Resting place Providence Memorial Park and Mausoleum 8200 Airline Drive Metairie, LA 70003 Repast will be held at Rose Borne Alexander/Marrero Community Center 1861 Ames Boulevard Marrero, LA 70072.

Carrie Givens Jinks, age 85 entered eternal life on March 14, 2022, with her children by her side. She was born on May 8, 1936, to the late Coleman Givens and Elvira Williams in Napoleonville, LA Carrie received her education in Assumption Parish... View Obituary & Service Information

The family of Carrie Givens Jinks created this Life Tributes page to make it easy to share your memories.

Send flowers to the Jinks family.