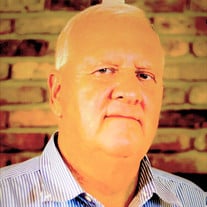 Cameron Patrick Crockett was nothing short of a hero to those who knew him. A man of integrity, who put God and his family above all else, Cameron was the type of person to go the extra mile for anyone he met. He was a son, father, grandfather, law enforcement officer and coach, and his zest for life will not soon be forgotten. Cameron never knew a stranger and was the type of person to stop what he was doing to help anyone who needed him or was in crisis. He passed away Dec. 13 from complications related to Covid-19. He was 63. Cameron leaves behind a beautiful family, including his adoring wife of 39 years, Vivian Ann Creel Crockett, their three children; Cameron W. Crockett, Heather Warner and Kimberly Crockett; and six grandchildren with another on the way: Brennan Martinez, Chad Martinez, Makenzie Crockett, Marigny Crockett, Isabella Warner, and Harlen Warner. He is also survived by his sister, Deborah F. Crockett Pace and brother, Walter Crockett, along with numerous nieces and nephews. Cameron is preceded in death by his parents, John and Ruby May Crockett; grandson, Colin Patrick Crockett Warner; grandparents, Rozel and Effie Crockett; sister, Mildred Crockett Deliberto; and brother, David Crockett. Cameron treasured his family and his community and was known for having an active presence with each of his children and grandchildren. He was a strict but loving father, but also a fun and active one. He coached little league for many years and was a lifelong resident of Tickfaw, Louisiana. He was a spiritual man who was always willing to pray with anyone, and even carried around crosses in his pocket to hand out to those who needed a boost or reminder that they weren’t alone. Cameron was also a public servant for most of his life. He served in the United States Army for 12 years, and was a law enforcement officer with the Tangipahoa Sheriff’s Department for 36 years. He was a passionate and committed deputy and even ran for Sheriff in 2019. Outside of work, Cameron had a number of hobbies, including fishing, horseback riding and his personal favorite – launching fireworks. His family described him as “a kid in a candy store” when it came to pyrotechnics. He spent years running fireworks stands and lighting up the sky during various celebrations throughout the year. Cameron will be greatly missed by all who knew him and is true a loss to the community in which he served. A service will be held in his honor at the chapel inside the Bandon G. Thompson Funeral Home. Relatives and friends of the family are invited to attend a visitation from the chapel of Brandon G. Thompson Funeral Home, 12012 Hwy 190 W, Hammond, LA. Friday, December 18, 2020 beginning at 10:30 a.m. until the start of the Funeral Service at 1:30 p.m. Interment will follow in the Woodhaven Church of God Cemetery in Tickfaw.

Cameron Patrick Crockett was nothing short of a hero to those who knew him. A man of integrity, who put God and his family above all else, Cameron was the type of person to go the extra mile for anyone he met. He was a son, father, grandfather,... View Obituary & Service Information

The family of Cameron Patrick Crockett created this Life Tributes page to make it easy to share your memories.

Cameron Patrick Crockett was nothing short of a hero to those...

Send flowers to the Crockett family.