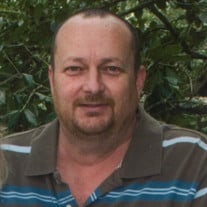 Galon L. “Butch” Durand III, of Pumpkin Center, LA passed away on April 16, 2022 at the age of 61 in Baton Rouge, LA. Born January 12th, 1961. Butch, as he was known to everyone that knew him and loved him, was married to Vicky Adams Durand for 43 years. They had two children, Gregory Lee Durand (Rebekah Durand), and Krystal Durand Vining, both of Pumpkin Center, LA. Butch was blessed with grandchildren, Brennon and Tyler Durand, Sydney and Maddison Durand, Joslyn and Trevor Vining, all of Pumpkin Center, LA. He loved them all so much. Butch was survived by his mother, Anna Lee Durand, two brothers, Daniel Clayton Durand, of Albany, LA and Wyndel K. Durand, of Pumpkin Center LA. Butch is preceded in death by his father, Galon L. Durand, Jr. Butch was a scaffold builder, union carpenter and then he owned his own construction company until his death. Butch loved to fish and he always enjoyed a good game of “Booray” with family and friends. He will always be missed and loved. Pallbearers will be Shelly Hill, Hunter Durand, Brennon Durand, Tyler Durand, Trevor Vining, Zach Durand. Honorary Pallbearers will be Trey Haltom, Darrel Adams, Terry Adams, Ricky Adams. Relatives and friends are invited to the visitation at Brandon G. Thompson Funeral Home, 12012 Highway 190 West Hammond LA 70401, on Thursday, April 21, 2022, from 6:00pm until 9:00pm and again on Friday, April 22, 2022, from 9:00am until the funeral service at 11:00am. Dr. Phil Weaver and Pastor Bradley Bennett will conduct the service and interment will follow in Jerusalem Baptist Church Cemetery.

The family of Butch Durand created this Life Tributes page to make it easy to share your memories.

Send flowers to the Durand family.