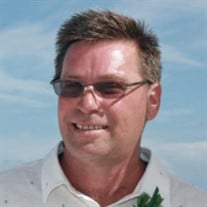 Age 53 of Morris, passed away unexpectedly on Saturday, August 8, 2020 at Ochsner Medical Center - West Bank Campus in Gretna, Louisiana. Born August 25, 1966 in Morris, Bryan James is a son of June (nee Rhodes) Roudis and the late Frank J. Roudis. He was raised and educated in Morris, and graduated from Morris High School with the Class of 1984. Bryan was a boat captain, beginning his career with Material Services in Morris, and most recently held employment with Gulf South Marine Transportation, Inc. He loved spending time outdoors and being on the water boating, particularly in the Florida Keys. Bryan was an avid fan of Notre Dame college football, and especially enjoyed playing card games and dice. He was a big music fan and took pleasure in going to concerts. More than anything, family was Bryan's main priority and he cherished any time he was able to spend with his children and grandchildren. Survivors include his wife, Holly (nee Brooks) Roudis of Morris, whom he married on June 21, 2015 in Key West, Florida; his mother, June Roudis of Morris, three children: Keri (Maurice) McIntosh, Skyler Roudis, and Abby Valerio, all of Morris; four grandchildren: Grace and Jayce Young, Maurice McIntosh, Jr., and Aviona Hoyt; his brother, Scott (Karen) Roudis of Morris, mother-in-law, Donna (Jim) Ferguson of Morris, father-in-law, Doug (Teri) Brooks of Horseshoe Bend, Arkansas, aunt and uncle: Robert (Debbie) Rhodes of Dwight and Nancy (Sam) Shelton-Young of Diamond; as well as several brothers-in-law and sisters-in-law, and numerous cousins, nieces, and nephews. Bryan was preceded in death by his father, Frank, his maternal and paternal grandparents, one brother in infancy, and his uncle, Harry Rhodes, Jr. A private funeral service will be held following the visitation. A live stream of these services will be made available for those who wish to participate remotely at 7:00 p.m., by logging onto Bryan's memorial page on the funeral home website. Preferred memorials may be made as gifts in Bryan's memory to the Ronald McDonald House, or to any local animal shelter out of respect for Bryan's love of all animals. Family and friends may sign the online guest book, upload photographs, and share Bryan's memorial page by logging onto www.ReevesFuneral.com

The family of Bryan J. Roudis created this Life Tributes page to make it easy to share your memories.

Age 53 of Morris, passed away unexpectedly on Saturday, August...

Send flowers to the Roudis family.