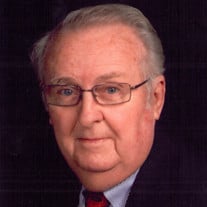 Barry Keith Wyld, 81, of Hammond, Louisiana, went to his heavenly home on January 24, 2018. He was born September 15, 1936, to Keith Wilfred and Marjorie Mary Taylor Wyld, in Arncliffe, Australia. His wife of almost 60 years, Ada Gayle Carlson Wyld, survives. Also surviving is his son and daughter-in-law, David and Karla Wyld, grandsons Spencer and Carson Wyld, brother Russell Siemantel and wife Linda, and nephews, Ryan, Sean, and Alec Siemantel and their families. Barry’s father, Keith Wyld, mother, Marjorie Wyld Siemantel, and his step-father Henry Siemantel preceded him in death, as did his in-laws, Carl A. and Ruby “Mimi” Carlson. At the end of World War II, Barry left his childhood home in Australia with his mother to live in New Mexico, later moving to live in both Amarillo and Dallas, Texas. He met the love of his life, Ada Gayle Carlson, in January of 1956 at what was then North Texas State College. He was never one to waste much time! In just a single weekend in August 1958, Barry graduated college on Friday, married Gayle at St. Olaf Lutheran Church in Cranfills Gap, Texas on Saturday, moved to Irving on Sunday, and enlisted in the Army National Guard. Barry was activated to service in the U.S. Army, serving as a sharpshooter in a tank division during both the Berlin and Cuban Missile Crises. After serving with distinction the adopted country he loved, Barry started a long, successful sales career. In fact, while the company may have changed names over time, from Federal Envelope to Champion to Cenveo, Barry was a steady sales leader and more, working his way up to lead both a large sales operation and eventually, the whole Dallas organization. Throughout those 44 years, Barry sold literally tens of billions of envelopes. So, you’ve likely had his work in your mailbox! Barry loved to be active, whether it was sailing, playing golf and tennis, or simply walking. Most importantly though, Barry was regarded as being a very caring, thoughtful person who never ever met a stranger! For Gayle, he was the perfect, patient husband! Barry loved to be by her side, whether it was going to church or senior functions, to class reunions, and yes, on frequent shopping trips. Late in life, she accompanied him through the long journey he was on, being there for him every loving step. Barry and Gayle were members of Our Redeemer Lutheran Church of Irving, Texas. When they moved to Louisiana in retirement to be nearer to David’s family, they became members of St. Paul Lutheran Church in Hammond. Relatives and friends of the family are invited to attend the visitation and memorial service that will be held on Saturday, January 27th at St. Paul Lutheran Church, 707 West Dakota Street in Hammond. Visitation will begin at 2:00 p.m. with the service, officiated by Pastor Louis Boldt, to follow at 3:30. Per Barry’s wishes, King Cake will be served! Memorial contributions may be made to the St. Paul Lutheran Church at 707 West Dakota Street Hammond, LA 70401.

The family of Barry Keith Wyld created this Life Tributes page to make it easy to share your memories.

Barry Keith Wyld, 81, of Hammond, Louisiana, went to his heavenly...

Send flowers to the Wyld family.