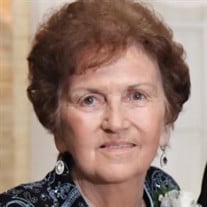 Ava Lee Morgan Watts, a devoted and loving wife, mother, grandmother, and great grandmother passed away peacefully on January 13, 2021 at Gonzales Healthcare Center. She was 81 years old and a native of Albany, LA, and a longtime resident of... View Obituary & Service Information

The family of Ava Lee Morgan Watts created this Life Tributes page to make it easy to share your memories.